The world’s smelliest fruit is a case study in how ecommerce is overcoming the challenges of national borders.

The durian is known as one of the world’s smelliest foods, but the fruit is loved by many – not least in China.

One of the most popular varieties of durian is called the golden pillow, grown predominantly in Thailand. Given the difficulties of transporting food not just over long distances but across international borders, this posed a challenge for Chinese durian enthusiasts – until last year.

In 2018, China’s retail giant Alibaba entered an agreement on durian fruit sales with the government of Thailand. Alibaba has now invested in a logistics hub in Thailand, which allows the group to deliver fresh durian to the Chinese market within five days. As soon as the service became available, Chinese consumers ordered 80,000 ‘golden pillow’ durians within just 60 seconds.

Demand for goods has of course always transcended national borders, but technology is now creating opportunities to meet that demand more efficiently than ever – both by linking buyers and sellers and by improving the logistical chain, as the durian vignette perfectly illustrates.

As we can see from the chart below, shoppers are looking primarily for better deals overseas and for products that are not available in their domestic markets. 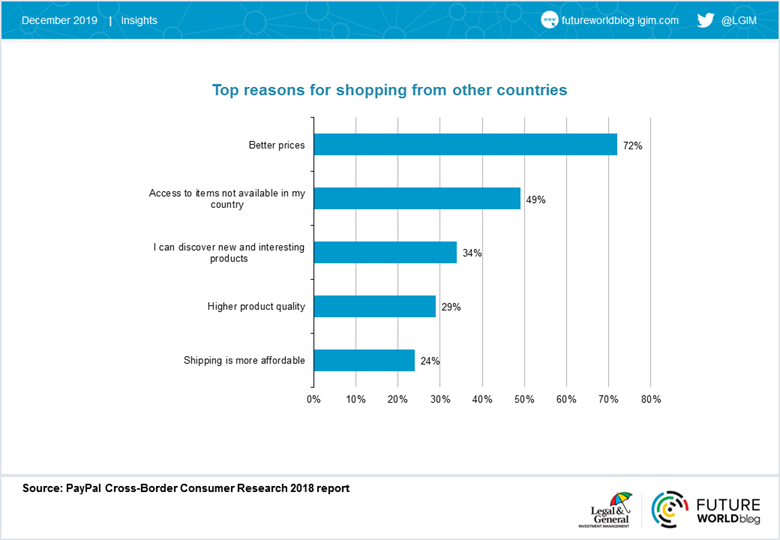 Conversely, the most common challenges identified by consumers when it comes to cross-border ecommerce are delivery times, delivery costs, and the transparency of delivery tracking, according to the International Post Corporation’s Cross-Border Ecommerce Shopper Survey.

On the cost question, 40% of the parcels dispatched across borders contain goods valued at less than €25 so lower delivery charges are a definite competitive advantage for merchants. Meanwhile, 60% of customers value sustainable packaging and 50% would be willing to pay an additional €0.10 for this type of wrapping.

However, given that customs regulations and processes were designed for large-scale shipments rather than for unique and small-scale orders, it can be challenging for sellers to fulfil their promise to customers of on-time delivery at a predictable cost.

For their part, merchants cite the following main challenges when engaging in cross-border ecommerce. 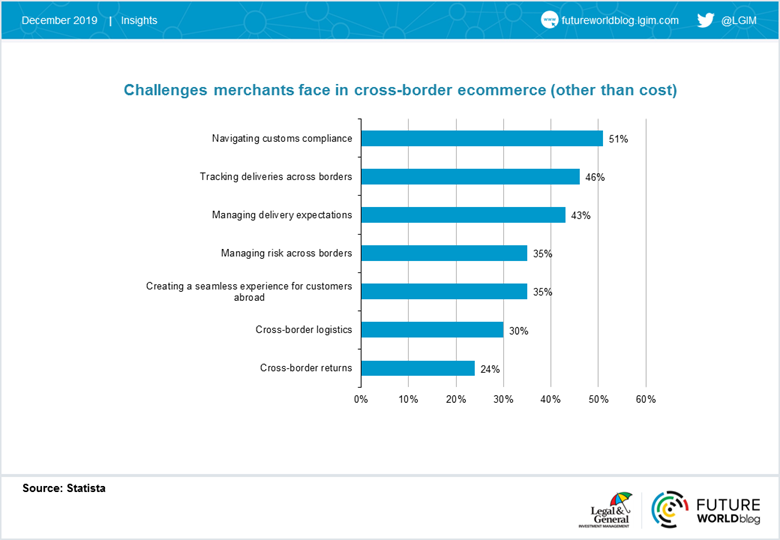 These challenges could undermine the rise of ecommerce. According to Zion Market Research, the global cross-border ecommerce market was worth $562.1 billion in 2018 and is expected to reach $4,856.1 billion by 2027, representing a compound annual growth rate of 27.4%. Furthermore, cross-border online sales are forecast to comprise a fifth of total ecommerce sales by 2022.

To realise this potential, innovation will be needed. Specifically, improvements in supply chains will be crucial.

For example, German business Zalando launched Zalando Fulfilment Solutions (ZFS) in 2017, which gives fashion brands access to Zalando’s logistics infrastructure and takes over their order fulfilment. By July 2019, more than 100 brands were using the service to benefit from a reduction in their fulfilment costs and a greater capability to sell more to customers across Europe.

In particular, ZFS manages the complex business-to-customer (B2C) last-mile process and bundles multi-brand orders made through Zalando’s platform into a single parcel delivery. The number of items shipped through ZFS duly grew by 400% in 2018.

Similar fulfilment services, targeting small and medium-sized firms in particular, are also offered by other companies such as UPS’s eFulfillment. This use of established firms’ existing infrastructure will help to improve cross-border ecommerce in the future.

Drones and other autonomous ground vehicles will also play a crucial role by bridging that last mile of B2C deliveries that can prove problematic for international deliveries. Rakuten and the supermarket chain Seiyu started Japan’s first domestic drone commercial delivery service to visitors of an uninhabited island popular with tourists in Tokyo Bay this summer, for instance. To access the drone service, visitors simply need to download the Rakuten Drone app and start placing orders.

Internationally, Rakuten and China’s JD.com are already collaborating to create unmanned delivery solutions for Japanese customers. These kinds of partnerships will pave the way to solving the last-mile challenge for the logistics sector, and should thereby substantially increase merchants’ profit margins and simultaneously reduce prices for consumers.

Regulatory developments are helping too. Despite the ongoing trade conflict between the United States and China, in other regions of the world policymakers are contributing towards a more efficient cross-border market.

For example, the implementation of Regulation (EU) 2018/644 should increase transparency regarding cross-border delivery services in the European Union, for both consumers as well as for small and medium-sized enterprises, and so tackle one of the biggest concerns for buyers. Furthermore, in February 2018 EU Parliamentarians voted in favour of a regulation against geo-blocking – the term for discriminating against online customers based on their nationality or place of residence while shopping, for example by refusing to accept orders from abroad or offering products only at substantial higher prices.

In short, cross-border B2C ecommerce is set to become a mainstream channel for retailers. Maybe even durian fans in Europe may one day enjoy the taste of the golden pillow. 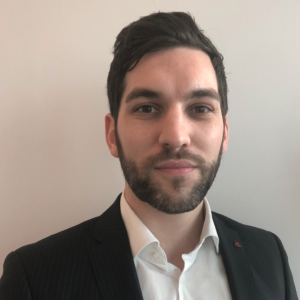