Without ARMs does the US economy have legs?

The US might be less sensitive to interest rate increases than commonly thought.

Until this year, the bond market was suggesting the Federal Reserve (Fed) wouldn't get very far in its rate hiking cycle. The popular narrative cited excessive US debt and the inability of the economy to tolerate a rise in interest payments. Indeed, outstanding non-financial debt has risen almost 50% (or nearly another $16 trillion) over the last decade. Even taking into account the growth in the economy since the recession ended in 2009, there has been no deleveraging as a share of GDP. 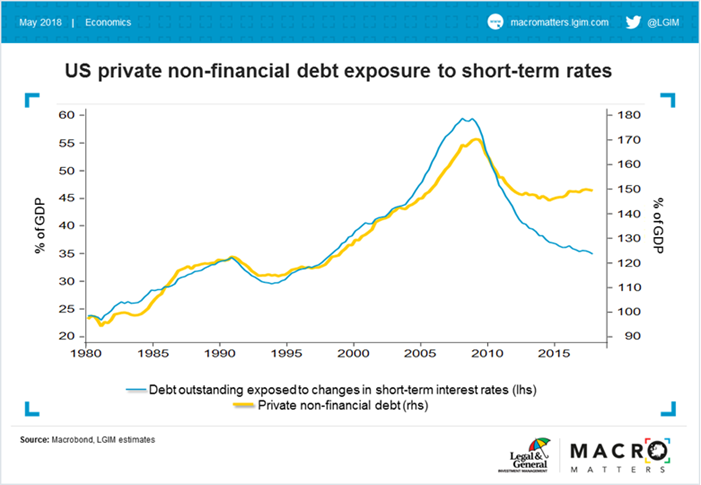 However, there has been an important shift in the composition of the debt. While public sector debt has risen significantly and is expected to rise a lot further in the coming years due to the budget plans, private sector debt as a share of GDP has fallen. This has predominantly been driven by lower household debt. Why might this shift from private to public sector debt make the economy less sensitive to higher interest rates? Rising interest rates will ultimately add to the government deficit via increased interest payments on the debt, but Congress is likely to be very slow to respond. The fiscal plans appear relatively fixed, at least until the next Presidential election. In contrast, the private sector might adjust spending more rapidly when faced with higher interest rates.

Until this year, the bond market was suggesting the Fed would not get very far in its rate hiking cycle

In addition, there are two other factors which protect the economy from higher short-term rates:

First, since the housing bust, the share of adjustable rate mortgages (ARMs) has fallen sharply. During the boom years, over 40% of new mortgages were directly affected by a higher Fed Funds rate when they reset. Worse still, as some were initially interest-only or even negative amortisation, the reset shock was even greater. Today, we calculate around 15% of the stock of mortgage debt outstanding are ARMs. The vast majority of households have locked in 30-year rates. This means exposure to changes in short-term rates is low and only new buyers are directly affected by a higher mortgage rates.

Second, most of the increase in corporate debt has been concentrated in corporate bonds and these are almost all fixed rate and therefore not exposed to changes in short-term rates.

To quantify the effect, we have analysed short-term interest rate-sensitive debt over time*. This leads us to the provocative conclusion that the US is significantly less sensitive to Fed hikes than the last cycle and similarly exposed as in the previous two cycles. This may not provide much consolation for the central bank since the Fed had to slash rates in the last cycle to ease the pain of the mortgage resets and even that did not prevent a crisis, but in the late 1990s, the Fed hiked well into restrictive territory to slow the economy down.

The market has begun to embrace the Fed’s projected path for interest rates (the dot plot), but the Fed might need to move its own estimates up if gradual rate hikes fail to prevent overheating developing, partly as a result of the ill-timed fiscal stimulus. Perhaps the vulnerabilities from more-than-expected Fed hikes lie outside of the US. There is the risk of a stronger dollar leading to an unwind of carry trades and increased stress in emerging markets. More generally, there could be some dislocation in those financial markets not prepared for a normalisation in interest rates. Of course, should this shock prove sufficiently large it would have some negative feedback loops for the US real economy. So it may not be possible for the Fed to simultaneously keep global financial market volatility at manageable levels and to soft land the US economy as the cycle matures.

*The calculation involves breaking down private sector non-financial debt into non-corporate business, corporate bonds, other corporate loans, mortgage debt, auto loans, credit card, student loans and other loans. After dividing through by nominal GDP we multiply each segment of debt by its share exposed to short-term rates. If possible, we apply a times series (especially the ARM share of mortgages). Otherwise we assume a constant share exposed to short-term rates over time for each debt segment based on recent data from the New York Fed.