Will the US central bank respond to flattening yield curves?

The long-end of the US yield curve is at its flattest for over a decade, risking distortions in the economy as the Fed raises rates. If this continues, at what point will the central bank get its dancing shoes on and consider Operation 'Twist Again'?

The shape of the US Treasury yield curve is often referenced as an indicator of the perceived health of the US economy, which in turn has global implications. Investors generally focus on the 2-year versus 10-year yield curve, because this is perceived to be a potential indicator of future recessions if it falls below zero. However, we find the 10-year versus the 30-year slope just as interesting. 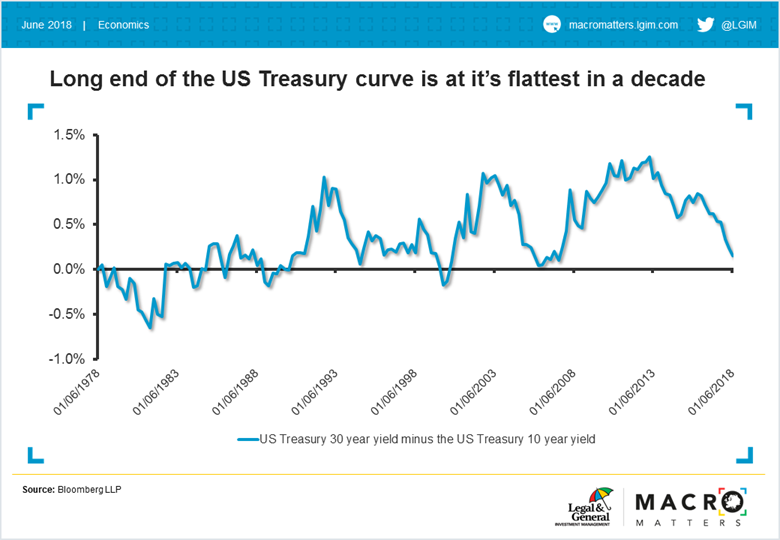 The latter is now at its flattest since June 2007. This is particularly important because most US mortgages reference the 30-year point, particularly as adjustable rate mortgages have fallen to just 15% of the total, as outlined by Tim Drayson recently in “Without ARMs, does the US economy have legs?” So if the US Federal Reserve (Fed) wants to tighten financial conditions for consumers, in order to meet its dual mandate of stable prices and maximum employment, higher 30-year interest rates play a key role.

So why has the curve become so flat – and is this a sign of impending doom? On the second question, well, no we don’t think so. The good news is that there are temporary and structural factors that are pushing down on long-end rates. On the temporary side, US tax cuts make it very attractive for companies to put money into pension schemes before September 2018, which then feeds into the structural trend of US pension schemes derisking, whereby they buy more long-dated bonds as their funding levels improve.

But the bad news for the Fed is that this flattening makes it hard for the central bank to tighten monetary conditions for consumers. Unless policymakers react to this, in order to achieve a certain level of cooling of the overall economy, the impacts could be very uneven for different segments: to compensate for the lack of impact on most mortgages, they’ll need to do more elsewhere, at the short end of the yield curve. That could require excessive tightening on some parts of the economy (those affected by shorter-term rates) and also on international financial conditions – in particular emerging markets, whose corporates borrow a lot in US dollars and against US interest rates.

What is perhaps surprising, given the issues outlined above, is that part of the flattening is the Fed’s own fault. In September 2011, it launched “Operation Twist”, named in homage to Chubby Checker’s smash hit The Twist, from when a similar policy was employed in 1961 (weird but true – see the BBC). Under the policy, which ran until December 2012, the monetary guardian bought $667 billion of longer-dated bonds with terms from 6-30 years, replacing shorter-term bonds with terms below three years. The Fed did this to deliberately flatten the curve as it sought to help longer-dated borrowing. So, is it time for officials to take the advice of both Chubby and Jive Bunny and the Mastermixers, and launch Operation 'Twist Again' (after a hit by the latter group)? In doing so, the Fed could sell longer-dated bonds in exchange for shorter-dated ones and release the pressure on the long end of the curve, helping ensure a balanced tightening of monetary policy.

Tim Drayson, our resident US economic expert, feels that even mentioning such a strategy would be risky for the Fed as it could cause a violent reaction in long-dated rates, which explains why he feels the current barriers to such a move are high. Very much in keeping with that view is the fact that there’s currently very little coverage of this as a policy option, but we feel it will probably become more mainstream and a risk to long-dated US bonds if the flattening continues.