Will helicopters fly us into the sunset?

Holidays often give you perspective. I write this blog post while enjoying a sunset looking out over the plains of the West Cape in South Africa. With calls for increasing fiscal leniency potentially growing louder, we believe that we are already on the way to helicopter money. If this proves to be the case, what could the implications be for different asset classes? 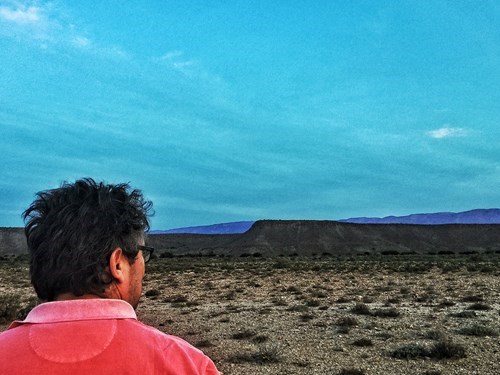 Some people think that the introduction of helicopter money will be disastrous, the moment policy makers announce it. They either believe people will panic straight away because they expect hyperinflation from the onset, or because they believe this proves central banks have no credibility left. We disagree with both concepts. As discussed in a previous post, helicopter money is unlikely to be a binary event, with policymakers likely preferring to edge slowly in this direction. This should prevent a more sudden shift in expectations.

We believe the initial market reaction could be similar to what followed the introduction of quantitative easing (QE). As QE did initially, helicopter money is likely to raise inflation concerns, but not in an extreme way. However, we disagree with the thesis that it will be bearish for most risk assets. While it's not quite a riding into the sunset scenario, investors are ultimately likely to view it as a credible, albeit outrageous step in policy making. 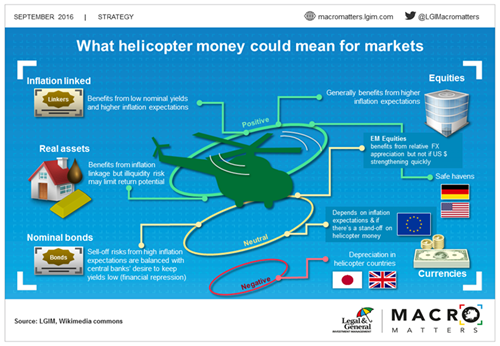 In terms of individual asset classes, there is certainly a risk of a significant sell-off in nominal bonds if investors believe the measures will successfully generate inflation and central banks can do nothing to cap yields. Every man and his dog would appear to be long duration these days. However, before we get too bearish on bonds, when helicopters start to fly we need to realise that governments and central banks will want to keep yields low, with financial repression (where yields are held below the rate of inflation) our base case. Ultimately central banks can target the level of interest rates by adjusting how much QE they do.

Assuming inflation doesn’t rise to high single digits, helicopter money should be good for equities, as it lowers the risk of very low inflation (when equities tend to do poorly). Emerging market equities in particular could benefit from low rates, the additional stimulus in helicopter countries and relative currency appreciation, although financially weaker emerging markets could suffer if the dollar strengthens quickly.

Real assets are perhaps the most obvious potential beneficiaries of helicopter money given their inflation linkage. Gold could specifically benefit as concerns over the future of ‘fiat’ or ‘paper’ money rise. However, illiquid real assets may perform less well due to concerns over future risks and the lack of liquidity to exit if required.

In terms of currencies, we would expect depreciation in countries such as the UK and Japan which we see as being most likely to embrace helicopter money, while the US and Germany could be considered safe havens. A view on the euro is not straightforward, however, as it could do fine if inflation expectations drift lower, but might weaken if there is a stand-off between Germany and southern Europe to introduce helicopter money in the euro zone.

We should keep in mind that while the calls for helicopter money are getting louder, the story is far from over as it might require a downturn before policymakers are prepared to implement the more aggressive stages of helicopter money, so prepare for increased volatility.