We are inclined to lean against the recent sell-off, which appears to be driven by excessive investor optimism and positioning.

After an unusually strong start to the year, equities have reversed course, prompting market participants to wonder whether the pullback constitutes the beginning of something more ominous than a pause for breath.

One week doesn’t make a bear market, but it’s the first sign of rising yields tempering investors’ enthusiasm elsewhere. The economic scenario playing out so far is closely aligned to our Economics Roadmap where lower unemployment than in 2006, and US President Donald Trump’s tax plan and protectionism stoke inflationary pressures while global growth remains strong (as outlined in Bruce White’s Three charts on ebbing misery). 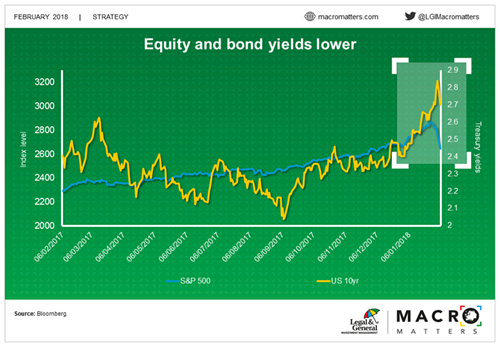 We need to see this bout of market volatility in light of the two-sided risks discussed at the end of last year: Anton captured it well in December when he argued that “the start of 2018 will be caught between two narratives: globally synchronised growth versus tightening global liquidity”. We have seen both forces at play recently: the positive growth backdrop dominating in January, and the prospect of tighter liquidity dominating in the first week of February.

On balance, we believe that the macroeconomic outlook does not justify a deeper retreat in risk assets or even government bonds, albeit to a lesser degree – making the current market turbulence a potential opportunity to find value across a variety of assets. Our view is that positive cyclical forces will dampen structural risks and headwinds for the moment.

The weakness appears to be led by declines in developed-market government debt, the yields on which have climbed amid investor concerns that rising inflation will prompt a faster-than-anticipated removal of monetary stimulus. Friday’s US jobs report, which showed that wages in January rose by the most since June 2009, heightened these worries.

In our view, the situation is analogous to the so-called Taper Tantrum of 2013, when bond markets led a broader sell-off following a suggestion by the US Federal Reserve (Fed) that it might scale back its asset purchases. That episode ultimately proved a buying opportunity for the asset classes hardest hit.

Just as back then, when threats to consensus trades stoked the market upheaval, we believe excessive investor optimism and positioning today have pushed equities back from record highs. And while the global economic recovery was still only just picking up pace in 2013, it is now well entrenched with synchronous growth across regions.

Rising yields are somewhat justified, however, given the strength of the world economy and quickening inflation expectations in the US. But structural issues – including long-term trends in demographics and inflation, as well as the global debt overhang – should help to restrain market rates, particularly at the long end of the curve.

Moreover, if the pullback continues much further, there is a strong chance that central bankers act to calm nerves by softening their tone on stimulus-withdrawal, as they did in 2013, to avert an unwarranted tightening in financial conditions. That said, such language would be premature at the moment: we do not expect policymakers to take fright at a stock market correction of 5%, especially after a ‘melt-up’ in equities of more than 5% in the past months.

We see this as classic 'late cycle' behaviour and a precursor for more fundamental headwinds to come. In this phase, markets become more volatile and more sensitive to drawdowns as positioning becomes more concentrated and investors become more trigger happy to pre-empt the inevitable bear market. According to Bank of America Merrill Lynch research, there is no serious market peak that has not been preceded by a >5% correction in the six months before, followed by a new high (it’s not part of the Heiligenberg Bubble Indicator as I found too many false positives).

For now, we are inclined to lean against the recent sell-off and would consider increasing our exposure to duration and equities should the market weaken much further. We also retain our overweight stance on the US dollar as a position contrary to much of the market consensus and a useful hedge against an escalation of concerns over inflation.