When you wish upon r-star

Central bankers love to talk about the “neutral rate of interest” (often referred to as r*). However, they simply don’t know the real-world value of this important concept. It would be helpful if the world’s monetary maestros were more transparent about this lack of understanding.

The textbook definition of the “neutral rate of interest”. is fairly clear. It is the level of the policy rate that is consistent with output growing close to its potential rate with full employment and stable inflation. In the wonky world of macroeconomists, the neutral rate of interest even gets its own nickname: r-star (or, if you prefer, r*).

Given how important neutral interest rates are conceptually, it is not surprising that central bankers like talking about them. Any central banker worth his/her salt can wax lyrical on the topic for hours.

However, it is important to recognise that (statistically speaking), nobody knows where the neutral rate of interest actually lies. The Federal Reserve’s best guess is revealed in their quarterly “dot plot”. When they first started publishing that estimate in January 2012, they were confident it lay somewhere in the region of 3.75% - 4.50%. Four years later, and that range has shifted to 2.75% - 3.75%. This evolution in thinking is summarised in the chart below. 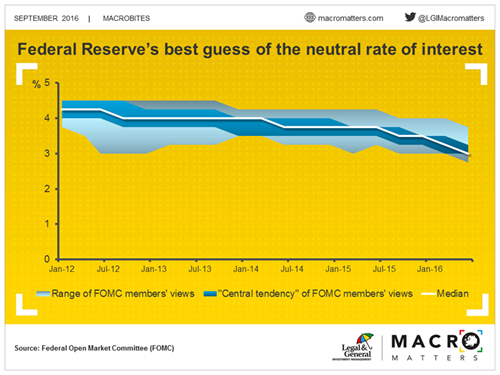 A generous reading of this revision from Federal Reserve Chair Janet Yellen speaking in June this year, is:

“the neutral rate changes over time, and, at any date, it depends on a constellation of underlying forces affecting the economy.”

However, a different interpretation would be that they simply don’t (and can’t) have a clue.

This is revealed in a recently released working paper from the San Francisco Federal Reserve attempting to measure the neutral rate of interest in the US, Canada, UK and Eurozone. The chart below shows the estimated neutral rate at the end of 2015.

The main point to note is the huge error margins around these estimates. Apparently, we can only be 50% certain that the UK’s neutral interest rate is somewhere between 0% and 6.5%. That isn’t exactly of much practical use.

Remember this the next time you hear a central banker talking about r* or one of its twinkly cousins: y* (the trend rate of output growth) and u* (the natural rate of unemployment). They simply don’t know the real world value of these important conceptual numbers.

This is not a burning issue when inflation is barely flickering as policy can be kept loose, but should inflation ever begin to flare, central banks may not be able to accurately signal how far or fast to raise interest rates.

It would be helpful if the world’s monetary maestros were more transparent about this lack of understanding. In the words of Voltaire (1694-1778):

“Doubt is not a pleasant condition, but certainty is absurd”.
Central banks