When the Satnav’s broken, dust off your roadmap

Monetary policymakers are often described as heading into “uncharted territory”. The latest example is the Bank of Japan’s decision to introduce a target for ten-year yields. You won’t find a precedent of this policy in recent history. But the territory is not totally uncharted: we saw something very similar in the USA roughly seventy years ago.

The implication of the phrase uncharted territory is that it is impossible to foretell the consequences of their actions given the lack of an appropriate template.  The latest example is the Bank of Japan’s decision to introduce a target for ten-year yields of 0% as part of their plan for "quantitative and qualitative easing with yield curve control".

See Tim's recent post on this for more. It is certainly unfamiliar, and you won’t find a precedent of this policy in recent history. But, the territory is not totally uncharted: we saw something very similar in the USA roughly seventy years ago.

The roadmap is quite old, but it is time to dust it off and inspect it carefully for hints as to the likely success/failure of the latest attempt to revive Japan’s flagging economy. 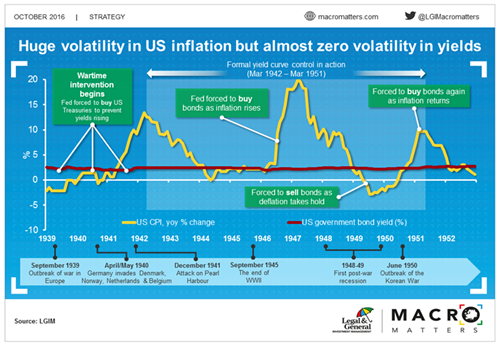 The circumstances were very different, but the USA had a policy of “yield curve control” from 1942 to 1951. Within two weeks of the Japanese attacks on Pearl Harbour, the US Treasury and Federal Reserve had agreed to stabilise interest rates to support the war effort. In March 1942, the Federal Reserve introduced an explicit cap on short-dated T-bill yields at ⅜% (0.375% for those who prefer decimals) and long-dated T-bond yields of 2½%. This implied a loss of control over the size of the Fed’s balance sheet and the monetary base. These targets lasted for nine years until being abandoned in 1951.

What can the Bank of Japan (and investors in Japanese bonds) learn from this period? There are basically three lessons:

The mechanism to drive long-dated yields down is obvious: buy more bonds. However, the Fed/Treasury also needed a mechanism to keep yields up as well as keep yields down. The periodic “Victory Loans” issued after the end of the war fulfilled this role. They allowed investors to purchase unlimited quantities of Treasuries with a 2.5% coupon at par (i.e. an explicit subsidy to bond buyers).

Early indications are that the Bank of Japan will adjust its monthly purchase targets along the yield curve, but we don’t know if they are willing to actually sell securities to hit their targets. Moreover, we've seen no equivalent to "Victory Loans" from the Japanese government (yet). Hence, most market questions are about the Japanese ability to keep yields up (not down).

We have previously defined helicopter money as "temporary fiscal stimulus financed by permanent monetary expansion". The Fed’s experiment in yield curve control put a temporary end to central bank independence with the Federal Reserve intervening to suppress yields irrespective of how much the US Treasury spent. In the early days of the policy, the voracious appetite for government spending was initially justified by WWII. However, the policy framework didn’t end in 1945.

Putting the genie of monetary financing back in the bottle proved substantially more difficult than letting it out.

Helicopter money offers governments the ability to spend money without raising taxes (either now or in the future). That is a pretty intoxicating political prospect. In the US, the decade-long experiment ended in discord and acrimony. With inflation pressures rising, a very public argument developed between the central bank and the government in the early 1950s over when and how to move away from yield curve control. The Fed-Treasury Accord was finally hammered out in 1951 to end the policy, but the Federal Reserve Chairman (Thomas McCabe) lost his job in the process.

Putting the genie of monetary financing back in the bottle proved substantially more difficult than letting it out. However, that is an issue for (much) further down the line in Japan’s case. In the meantime, the success or failure of this latest gambit to reflate the economy will depend on the decisions made in the cabinet and the finance ministry rather than the central bank. Do they understand that this new monetary framework gives them a green light to spend? Are they genuinely willing to do it without the kind of existential threat faced by the US in the 1940s?

Lars, our equity strategist, is in Japan in a couple of weeks to ask those difficult questions (and plenty more). Expect more from him on this topic soon …