When can the UK safely ease the lockdown?

Our analysis suggests that by prioritising people with comorbidities, the UK could be six weeks away from vaccinating the 55% of the population that is most vulnerable to COVID-19, weakening the link between cases and hospitalisations.

We have argued before that, from a public-policy perspective, the key metric for easing restrictions is likely to be hospitalisations rather than COVID-19 case numbers.

We have also seen a strong correlation between age and the likelihood of a COVID-19 infection requiring hospitalisation. It therefore makes sense for the UK government to have prioritised giving second vaccine doses to the elderly and other vulnerable younger groups, rather than continuing to give as many people as possible the first shot.

By aggressively rounding up the share of younger people who have comorbidities, I conservatively estimate that 55% of the population (and a minimum of 38%) needs two doses for the government to feel comfortable taking the country out of lockdown, by severely weakening the link between cases and hospitalisations.

This fits with estimates from the US Centers for Disease Control and Prevention that 40% of the US population are particularly vulnerable to COVID-19, with 60% having ‘chronic conditions’.

The key insight here is that hospitalisation in younger cohorts is not ‘random’, but instead influenced by comorbidities. In the first wave of the virus, 85% of hospitalised patients in the US aged 50 or younger had comorbidities (and it was the same for those aged 50-64).

So how many younger people have comorbidities? Data from Germany give us some indication. 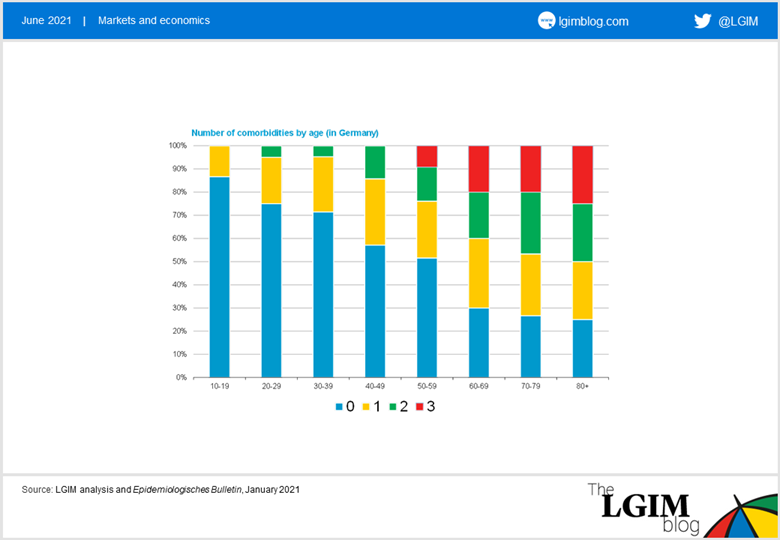 Using these data on the distribution of comorbidities among younger age cohorts, we can estimate the ‘minimum’ proportion of each age cohort that needs to be vaccinated and compare that with the number of vaccines already given, assuming existing vaccinations have been prioritised by vulnerability (the UK government accelerated the vaccination of people with health conditions including severe asthma, heart disease, diabetes, impaired immune system, and obesity among others).

Applying this model to where we are with vaccinations in the UK today, I estimate 5% of the population still needs a first dose and circa 18% needs a second dose for the most vulnerable cohorts to be sufficiently immunised. On current rollout rates, this could be achieved in four weeks – probably not coincidently the same length of time by which the government is expected to delay the next phase of reopening.

While inoculating these groups won’t protect everyone, it should severely weaken the link between cases and hospitalisation, with each additional vaccination having diminishing returns.

Although UK cases are rising rapidly due to the delta variant, there’s been encouraging evidence that double vaccinations work, particularly the divergence witnessed between elderly and younger cases.

There’s still a risk of hospitalisation among unvaccinated or single-dosed younger cohorts, but prioritising according to need should maximise the trade-off between protecting the vulnerable and the economy.

Given the current vaccination run rate, the UK could now be four weeks away from fully immunising those at greatest risk. If we allow another two weeks for the vaccines to kick in, that could leave the UK six weeks from lifting the remaining lockdown measures.