Tariffs have not had the negative impact on China that many expected, which has important implications for the country’s prospective trade deal with the US.

Sentiment has improved markedly since President Trump set out the prospects for a 'Phase One' trade deal. However, I would suggest curbing some of that enthusiasm, at least with respect to China.

As a starting point, consider that for a trade deal to boost the economic outlook, one would need to begin by establishing that Trump’s tariffs had hurt China in the first place. We find little evidence for this.

Since Trump started to introduce tariffs in the middle of 2018, trade has in fact contributed positively to China’s GDP growth. Chinese exports have weakened, but not by more than those of other countries that didn’t face tariffs; there was a global slowdown, in other words. More importantly for China, the country's imports softened to a greater extent than exports, leading to a positive growth contribution from net exports (exports minus imports). 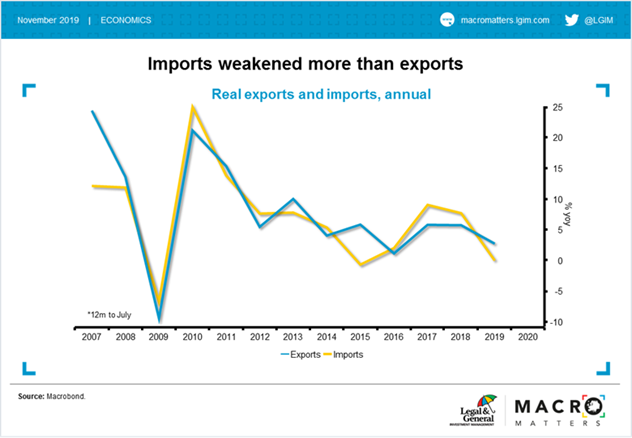 Why didn’t Chinese exports suffer more? The answer is trade diversion. Instead of exporting directly to the US, China exported to the likes of Vietnam and Taiwan, from where the goods were then shipped to the US – often after minimal processing or simple relabeling. This explains why China’s share of global exports remained unchanged, despite a steep fall in exports to the US. 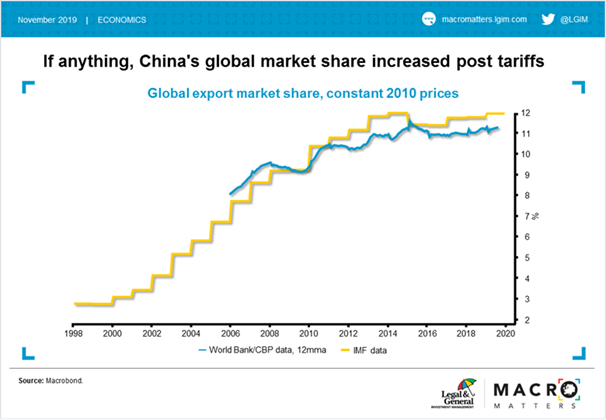 Now, to be fair, most people expected the growth impact of weaker exports to be small (though not zero, as our analysis suggests). Much of the damage was expected to come in the form of weaker sentiment and investment. Investment did weaken in response to Trump’s tariffs, but the joint growth contribution of net exports and investment is still positive. 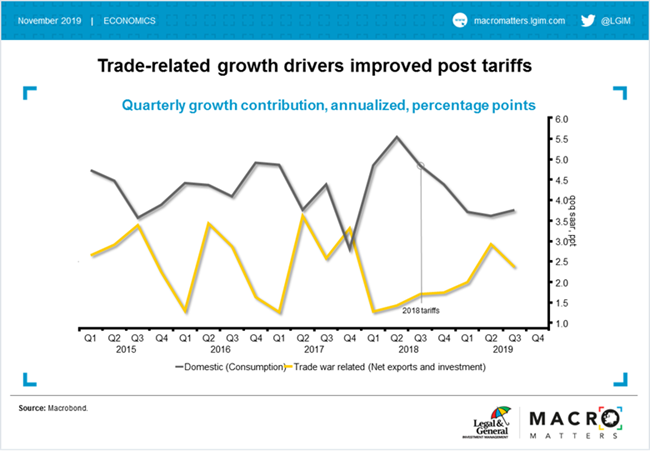 It turns out that consumption, an unambiguous indicator of domestic demand conditions, is the main driver of China’s recent slowdown. This finding, by the way, can also explain the divergence between the official and Caixin purchasing manager indices (PMIs) that much of the punditry pored over this month. Caixin surveys mostly export-oriented businesses, which were more upbeat than the domestically oriented enterprises surveyed for the official PMI.

What, then, is behind the weakness in domestic demand? In our view, it is the authorities’ relentless efforts to de-risk the financial system. This has severely constrained credit supply, including for consumers. On top of that, car sales contracted by 16% as incentive schemes expired and emission standards were tightened. The latter subtracted 0.5% from growth over the past year.

While the authorities will not sit on their hands, we don’t foresee any major easing

Car sales have now stabilised and should no longer subtract from growth, but this positive growth impulse will be broadly offset by a spike in consumer prices. Owing to the swine flu, inflation is expected to hit 5% in early 2020, thereby eroding consumers’ purchasing power. While the authorities will not sit on their hands, we don’t foresee any major easing of financial conditions.

What are the investment implications of these developments? First, a Phase One trade deal is less likely than many pundits would have you believe. The Chinese are simply not that desperate. Second, if a Phase One deal is struck, Chinese and emerging-market assets may rally. Our analysis suggests that this rally should be faded.