Chinese GDP statistics are notoriously unreliable at signalling turning points, so I decided to test the temperature on the ground with a macro tour in Beijing. A couple of days of meetings with policymakers, academics and investors left me comforted and alarmed in equal measure. 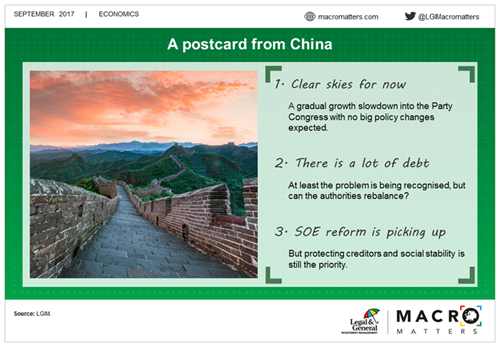 The mood was upbeat. Faith in policymaking appeared high following the apparently successful navigation of the tricky period when the currency was under pressure in early 2016. Growth had clearly rebounded and the broad consensus that Emiel identified in his trip last year around the authorities ensuring smooth sailing through to the Party Congress had been achieved. Nevertheless, some slowdown was now expected into year end. We were told that there will be no major policy shift post Party Congress, but that the emphasis is shifting away from growth targets towards jobs, real disposable income growth and the environment where there has been a large increase in the enforcement of standards.

There was a sense of pride about China’s development and a more welcoming approach to foreign capital. China appears to be the champion of globalisation as other countries become more inward looking. Internally, the next major push appears to be towards the cyber economy and encouraging entrepreneurs (everyone in Beijing was on their smartphone).

While market forces are set to play a greater role, this remains socialism with Chinese characteristics

We repeatedly steered the conversation towards China’s dependency on debt. There is a clear recognition of the corporate debt mountain and vulnerability should interest rates spike, but the plan is to move cautiously. Officials admitted the non-performing loan problem is far larger than published, but gave the view that the banks are relatively robust and forbearance can delay any disruption to the economy. They did flag that asset managers are most exposed to the risk of bad credits. The impression was that the pace of State Owned Enterprise (SOE) reform is set to increase. The focus is on balancing social cost and there remains a reluctance to liquidate and impose losses on creditors. Yet there are a number of initiatives in place with restructurings accelerating among the 20% of unprofitable SOEs.

The plan is to reduce headcount and increase efficiency, but with substantial government financial assistance to preserve social stability via either early retirement or retraining. There is also a shift to a mixed ownership structure. This involves roughly equal partnerships between SOEs, private/foreign investors, senior management and an employee share portion. In addition, there is a further crackdown on excess capacity. Only the more efficient companies are to be allowed to survive. This has proven effective in reducing the credit intensity of growth as it has supported commodity prices and profitability, allowing companies to fund investment out of retained earnings. There is also a continued push towards joint ventures as this imposes better behaviour on local governments.

While market forces are set to play a greater role, this remains socialism with Chinese characteristics. The government will interfere with financial markets if they see dislocations and there is no ambition to delever the financial sector. The main emphasis is on controlling the increase in leverage. The exchange rate will continue to be carefully managed though for now there has been enough appreciation versus the dollar. This has allowed some relaxation of capital controls. While we view President Xi Jinping’s consolidation of power suspiciously in the west, in China some of those we consulted viewed him as a reformist whose efforts are being hampered by the vested interests which he is now tackling. The anti-corruption drive was seen as a positive development.

The main worry seemed to be around the housing market, especially the lack of affordability in Beijing with the views aligned with Erik’s blog on the topic. On geopolitics most of the discussions centred around North Korea. China is prepared to gradually increase pressure on North Korea, but won't cut off oil completely to cause a collapse of a regime. Negotiation was seen as the only option.

The weather in Beijing was glorious - warm and sunny with clear air. This left one contact joking that the stories of pollution were just ‘western progaganda’. But as I departed for Tokyo, the smog had descended and I was left wondering how much visibility we really have on China.