US/China relations: have you heard about the two-thirds?

Antagonism with China is not a short-term feature of US politics; we believe it will influence markets long after the Trump presidency.

A quick internet search reveals many things that 66% of Americans apparently believe. Some of these are surprisingly relevant: 66% of Americans support a permanent work-from-home culture, for example, and 66% disapproved of the way US President Donald Trump handled unrest related to racial inequality in the country.

Far from the popular impression of a US population that is split ideologically straight down the middle, then, it seems a material consensus can emerge on some topics. This has important implications for how investors should think about November’s election: partisan gridlock shouldn’t necessarily be a baseline assumption.

Indeed, coinciding with the perception that President Trump has handled the COVID-19 outbreak poorly (66% of Americans think Germany has dealt with the pandemic well, compared with 47% who think the US has managed it well), dissatisfaction with his bellicose stance on Black Lives Matter protestors contributed to Trump’s declining odds of winning a second term earlier in July.

But beyond what happens in this year’s electoral campaign, investors should pay attention to another topic on which two-thirds of the US agrees – one that will shape global markets for decades.

According to the Pew Research Center, 66% of Americans say they have an unfavourable opinion of China, up from 47% in 2018 and just 29% back in 2006. This view is widespread, and rising among almost all demographics – old and young, conservative and liberal, those with a college education and those without. 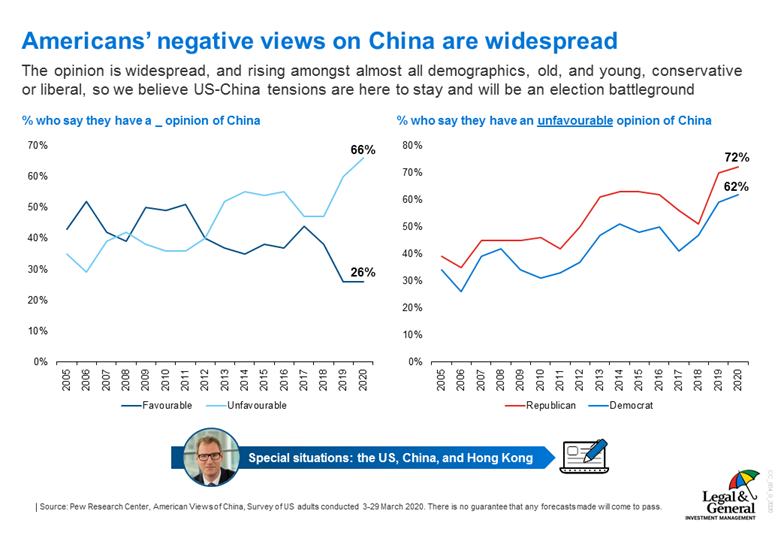 This is ultimately being reflected in politics and policy. There is bipartisan support for being tough on China, both in Washington and in the country. Trump is thus receiving the least pushback from Democrats on his China policies; criticism has dwelled on his style, not the substance. Anti-China legislation has often passed with broad support from both, a rare occurrence in Congress these days.

All of this suggests that China will not only be a key campaign battleground as we head towards November’s elections, but a longer-term target of US antagonism.

Our assumption is that Joe Biden’s rhetoric on China will be strident but still much calmer than Trump’s, with fewer sudden, extreme and unpredictable shifts. Should Biden win – as he is currently favourite to do – this may not improve the US/China relationship much, but should make it more predictable for markets and therefore less of a source of uncertainty.

Our other assumption is that Biden would look to pursue a more multilateral approach and build a united front against some of China’s practices. This should make a trade-war escalation with Europe, beyond the normal back and forth of past administrations, less likely. Overall it paints a picture that is consistent with the Thucydides Trap argument: US/China tensions are here to stay.