US households have apparently been saving far more than we realised. Could this affect how much longer the economic cycle lasts?

It is relatively easy to be a weather forecaster. You have accurate records of the past and can observe current conditions by peering out the window. As economic forecasters, we have no such luxury. Visibility around today’s environment is often murky as we only have data that are relevant to events a few weeks earlier. So we don’t even know the starting point or how people are reacting to the latest shock. Furthermore, some data are prone to heavy revisions. This can all change the view of economic history, as well as the economy's likely future trajectory.

Take for example the latest US national accounts , which recently underwent their comprehensive revision that takes place every five years. As well taking on board new information previously not available (such as from census surveys or tax returns), they also introduced new methodologies. Fortunately, the contours of growth over the last decade remain close to previously published. The financial crisis has not been revised away and growth during the subsequent annual expansion has continued to average a modest 2.2%. But there were three important changes beneath the surface.

First, the statisticians seem to be getting a better handle on measuring price changes of software and other high-technology equipment, raising their contribution to growth. Second, near-term growth momentum appears stronger, reducing the already low probability of an imminent recession. While an escalation of the trade war represents a significant downside risk, domestic strength makes the timing of the fight good from a US perspective. The data show that demand has been strong and this has led to an unexpectedly large drawdown of inventories. Companies will have to replenish stocks in the months ahead and this should support production and employment.

Finally, and most intriguingly of all, there have been massive upward revisions to the household saving rate in the US. This was due to stronger income growth for small business owners as well as increased dividend and interest income. The largest change was over the last couple of years, which probably reflects new information from tax returns (which are submitted with a lag), but saving was also revised up somewhat in earlier years. 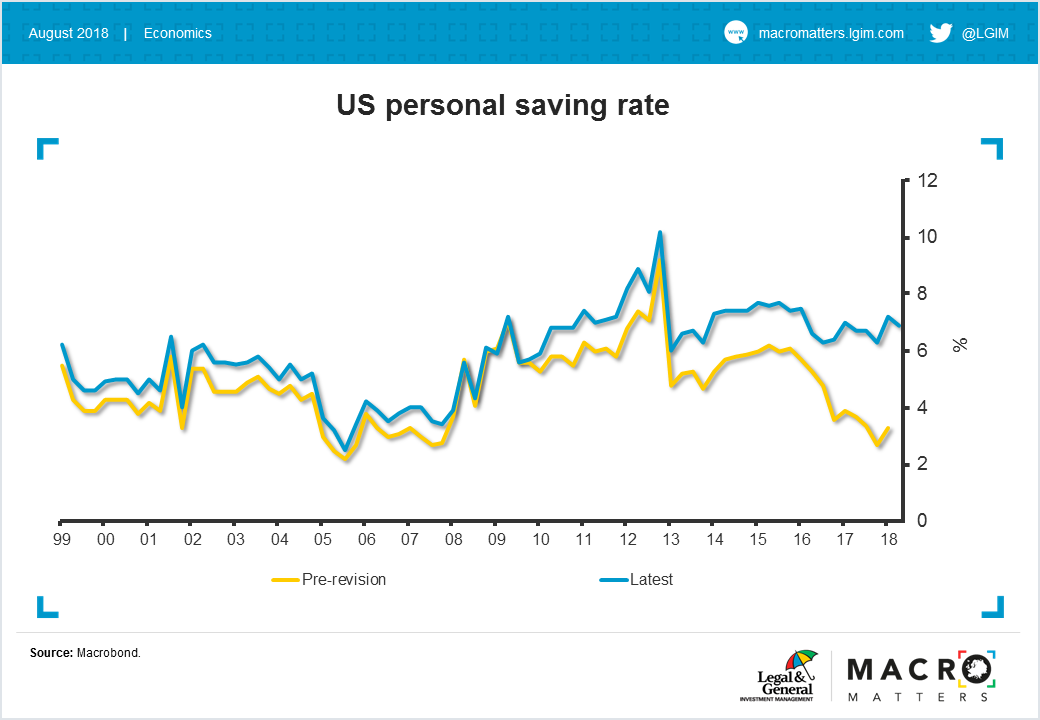 Previously, it appeared as if households were becoming increasingly overstretched as the saving rate was falling sharply. Now the implication is that despite the large rise in confidence and household wealth in recent years, consumers appear to have been cautious. This makes them less vulnerable to asset price corrections and creates a buffer for them to dip into. It also seems as if less of the gains from the recent tax cuts have been spent. So while we still expect growth to slow late next year as the fiscal stimulus begins to fade, the risk of an outright recession triggered by a sudden rise in saving appears to have fallen.

However, we should be careful about drawing strong investment conclusions. After all, the saving rate is essentially the difference between two large numbers (income and spending). The scale of the revision and threat of future large revisions makes saving a notoriously unreliable indicator. I feel on safer ground predicting a cooling from the summer heatwave in the weeks ahead!