The Chancellor has delivered more fiscal stimulus, which should sustain the economy through the re-opening, but the ultimate path back to discipline may rely more on tax increases than spending cuts.

This will be my last blog for a while, as I am due to start maternity leave next week. After nearly 10 years at LGIM I think a break is in order, but I’m told there are easier ways to go about it. Apparently the initial sleepless nights are worth it and give way to some joyous moments.

Chancellor Rishi Sunak may have the opposite experience with his own baby, the UK economy, enjoying some stimulus-fuelled good times sooner and deferring the more difficult moments for later.

Delivering his budget on Wednesday, Sunak offered the country plenty of financial largesse. Worth a total of £65 billion (equivalent to 3% of GDP) in the coming year, the new measures he unveiled should be enough to support both consumption and investment as the economy gets back to something like normal.

Alongside widely trailed policies like the extensions to the furlough scheme and stamp-duty holiday, we were introduced to the ‘investment super-deduction’. From April 2021 until March 2023, companies will effectively be able to cut their tax bill by up to 25p for every £1 they invest in qualifying new plant and machinery assets. This was the single biggest ticket item in the budget, costing over 0.5% of GDP both this year and next, and ought to help bring forward investment.

The overall budget was broadly in line with our GDP forecast, but the investment incentive poses some upside risk to our central scenario (as portrayed in the chart below). 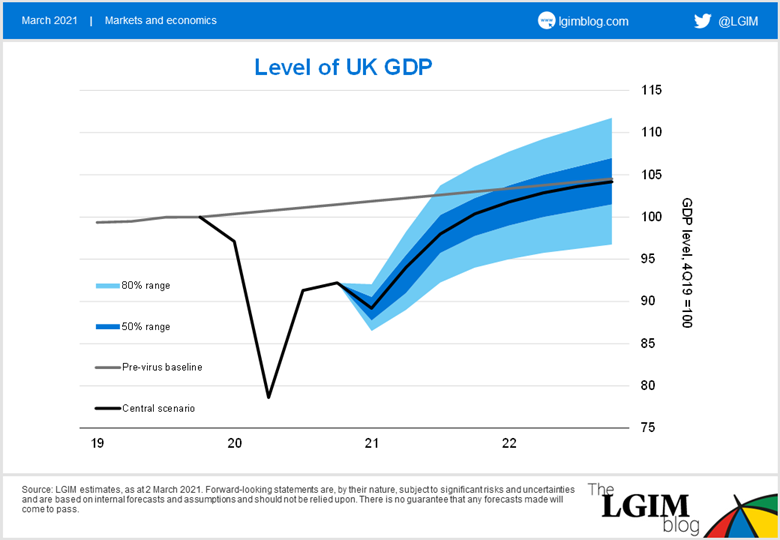 As expected, though, the Chancellor has barely made a dent in recouping the vast amount of stimulus spending. The overall level of fiscal tightening, via corporation tax and fiscal drag, is very modest and does not kick in until 2023-24 (and yet taxes as a share of GDP will soon reach heights last seen in the late 1960s).

The current fiscal framework is nevertheless under review and, like Chancellors before him, Sunak is likely to announce new rules later in the year.

Over the longer term, the restrained public purse in the years prior to the pandemic in my view means any fiscal tightening is more likely to focus on higher taxes than lower spending. But rather than taking the highly unpopular decision to increase rates on the big revenue generators like income tax, national insurance and VAT, possible alternative options for Sunak may include a reform of wealth taxes.

For example, the Office of Tax Simplification has recommended the alignment of capital gains tax with income tax. The Institute for Fiscal Studies believes inheritance tax and council tax are also in need of reform.

In the meantime, the UK’s net debt will continue to rise for a couple of years until peaking at 109.7% in the financial year 2023-24. The Office for Budget Responsibility notes that despite the increase in borrowing, debt-servicing costs have fallen significantly thanks to quantitative easing.

On the other hand, the median maturity of the UK’s government debt has fallen as a result of this, leaving the public finances more sensitive to rate increases. While this highlights the potential difficulties the Bank of England will face in being able to increase interest rates in the future, this is not new information for the market. My colleague Mitul has taken a closer look at the implications for the gilt markets in this blog.

All in all, in the face of record-high borrowing, the fiscal clawback looks light-touch. Combined with a still loose monetary policy in the absence of underlying inflation pressures, the UK growth outlook is looking very rosy indeed. May we and Chancellor Sunak enjoy these joyous moments while they last.