Until early this year, markets cheered ‘good’ US President Donald Trump. Indeed, fiscal stimulus and deregulation have supported growth, though we continue to question whether the former is a sensible medium-term macro policy.

But in recent months, markets have become increasingly nervous around the Trump administration’s protectionist agenda. It is very hard to judge how much pain all sides are willing to tolerate. So far, we have seen a proportionate retaliation to any US measure and signs that the US administration is prepared to adjust its rhetoric and policy if the stock market wobbles. Rather than try and forecast how this will end, we can at least attempt to put some numbers around the direct impact of increasing trade barriers. However, the biggest uncertainty is the indirect effect: financial conditions and business sentiment could be shaken by changes to the global trade order.

So far we have seen tariffs on steel, aluminium, lumber, solar and washing machines based on tenuous national security grounds and other obscure trade laws. The higher imported costs have probably done more damage to the users of these goods than the value of the jobs ‘saved’ in the protected industries, but the overall macroeconomic impact is negligible. All the products combined are a tiny share of the US economy (at no more than 0.2% of GDP).

In response to the investigation into China’s alleged theft of US intellectual property, 25% tariffs on $34 billion of Chinese imports are due from 6 July. A further $16 billion of such measures are undergoing additional consultation. This initial list mostly avoids consumer goods. China has announced it will retaliate proportionately and in areas designed to inflict maximum pain on the US. Yet the direct impact on growth is unlikely to be any greater than 0.1%-0.2% of GDP, in our view. It could add 0.1% to the core Consumer Price Index but even that assumes the US is unable to source or produce the goods easily elsewhere. With the US expected to grow around 3% in 2018, this small impact gets lost in the rounding. The baseline assumption in our economic forecasts is that the trade war reaches a fragile truce around these levels of tariffs but we are concerned that it could get worse in the run-up to the US midterm elections in November.

Trump has proposed 10% tariffs on another $200 billion of China goods if China retaliates against the initial $34 billion. The impact is another 0.2-0.3% off of US GDP. There is also the potential for widespread tariffs on US car imports. We would expect economists to start making noticeable cuts to GDP forecasts if these measures are implemented, but they probably won't be before the autumn given the previous pattern of investigation and consultation.

It does not stop there as Trump is also threatening a further $200 billion of tariffs if China continues to retaliate. This would now cover virtually all of China’s $500 billion of goods exported to the US and raise prices on high profile consumer goods such as TVs and mobile phones. The more this escalates, the risk increases that the indirect effects grow disproportionately given the potential negative financial market reaction and damage to business and consumer confidence.

Can Trump win a trade war?

China can’t match Trump’s tariff threat dollar for dollar as it only imports around $150 billion of US goods. However, as seen in the chart below, the trade deficit vanishes when one considers US subsidiaries’ sales in China. 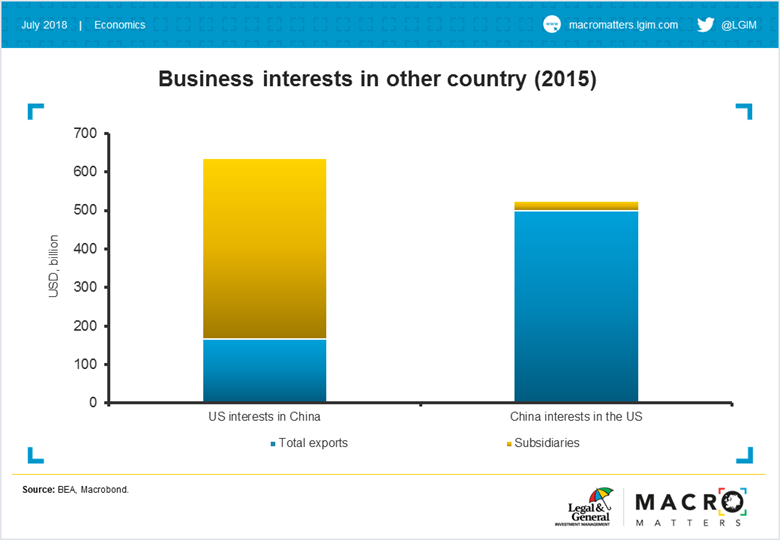 It is not clear to what extent Trump will block Chinese investment in certain US technologies, but China can retaliate by pressuring US companies operating in China. Customs delays, tax audits and increased regulatory scrutiny are possible with Hollywood and US pharmaceutical companies easy targets. China has also proven very effective in the past at whipping up the propaganda machine to encourage boycotting US imported goods or even travel to the US. While the negative impact on China’s GDP from a tit-for-tat trade war is roughly double that of the US (as it is a smaller and more open economy than the US), it is growing at least twice as fast. In addition, China probably has more policy tools available to offset the demand shock. Don’t rule out the possibility that China’s policy becomes more reflationary again in response to a potential negative demand shock from trade.

Hollywood and US pharmaceutical companies are easy targets for China's retaliation

Overall, we are worried about the lack of moderate influences in the US administration and much hinges on China’s perception of US motives. If Trump’s tactics are merely part negotiations, it should be possible to find a compromise which could even lead to improvements in the global trading system. However, if the goal is more strategic and an attempt to curb China’s emergence as a global power, Beijing will take a tougher stance against any perception of bullying from the US. For this reason and the rise in oil prices, we believe global growth risks are to the downside from the current decent momentum.