Let’s assume Trump wins or at least the market re-prices his chances of winning. What would a President Trump do and how would asset prices respond? It’s a question worth asking, but not an easy question to answer given that Trump describes himself as ‘totally flexible on very, very many issues’.

What would Trump do?

Another Donald, Donald Rumsfeld, would have said that there are many unknown unknowns. One can view this as a negative because markets don’t like uncertainty or as a positive because a pragmatist may be more likely to get things done in a partisan Congress and it would let us discount some of his more extreme positions as only the starting point in a negotiation. 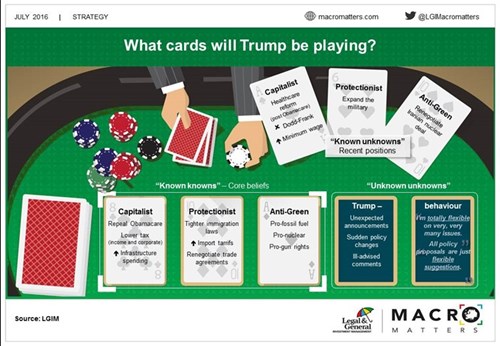 But we need to add constraints to the equation.

The President may be the most powerful person on the planet, but he/she is far from omnipotent. The Constitution gives the President more leeway on foreign policy and trade treaties than on domestic affairs, but even on the former there are several checks and balances in place. The White House has some latitude to punish countries deemed to be engaged in currency manipulation or other free trade abuses; something Trump has alluded to. Signing trade treaties requires Senate approval, though it is seen as likely that the President has the authority to pull out of existing trade agreements.

Given the unusual lack of visibility about what policy mix to expect from a Trump administration, uncertainty is perhaps the only thing we can be certain of. We've therefore attempted to capture what we do know in the summary below:

It is a cliché that markets don’t like uncertainty, but we would expect the increased likelihood of a Trump Presidency to be accompanied by a higher risk premium for US assets. Political uncertainty typically rises ahead of elections, but in this case it could stay higher for longer.

For equities, some of the higher risk premium should be off-set by the prospect of increased fiscal spending, providing at least a short-term boost from higher growth expectations. Both Trump and Clinton have plans to increase infrastructure spending, but the chances of getting a significant package passed should be higher under Trump.

This is naturally a less attractive policy from a sovereign bond holder perspective, especially when coupled with Trump’s rather worrying comments on treating bond holders. His repeated boasts of taking on debt as a business man with the explicit intention of defaulting on it later are a concern and things aren’t improved by the various stances he has taken on debt repayment over the past few months. These have ranged from suggesting a default, to renegotiating the debt and printing money to pay the debt. It is likely Trump’s views on this would moderate as he got closer to the Presidency, but it would become at least a little bit more difficult to see US Treasuries as the world’s risk free asset.

Some assets that qualify as potential Trump losers are likely to lie outside the US, where the President’s policies are less likely to be reined in by Congress. The prospects of the Trans-Pacific Partnership (TPP) passing into law would decline, a Transatlantic Trade and Investment Partnership (TTIP) agreement becomes less likely, it is difficult to see relations and trade with Mexico improving and Trump has floated ideas of significant tariffs on imports from China. The latter would likely be more disruptive for trading nations such as Germany and Japan than for the US itself.

Upside risk to inflation seems to be a theme that comes out of several of the above. Higher minimum wage, reduced trade and curbs on immigration are all likely to exert upward pressure on domestic prices.