Trump – too close for comfort

Conventional wisdom says Donald Trump doesn’t stand a chance against Hillary Clinton in a general election. Although a Trump presidency is not our base case either, its probability seems too high to ignore, with significant potential implications for US assets.

More likely than you think

The ‘conventional wisdom case’ of Trump not becoming President sounds reassuringly solid and is a sensible base case. Unfortunately, conventional wisdom doesn’t exactly have an impressive track record on Trump. First off, his approval ratings may be at record-breaking negative levels, but Hillary Clinton’s aren’t much better, so it’s possible they cancel each other out as a factor in deciding who to vote for.

It is also possible that Trump can boost the white male turn out to offset his poor polling with minorities and women. Then there’s event risk. An economic downturn is not impossible and tends to weigh on the incumbent party, in this case Clinton.

We could easily add further to the list, but the point is that the probability of Trump winning seems higher than consensus thinks and certainly too high to ignore. And the experience from history is clear: a significant shift in the probability of a political event can be enough to move markets.

What would Trump do?

Let’s assume Trump wins or at least the market re-prices his chances of winning. What would a President Trump do? It’s not an easy question to answer given that Trump describes himself as ‘totally flexible on very, very many issues’, but it’s an important issue to think about.

Overall, it is possible that Trump’s legacy will be a shift of the centre ground of US politics to the left; a move away from globalisation, lower taxes and de-regulation.

The list in the table below starts with the known knowns, by which we mean all the positions Trump has shown the greatest consistency on over time. We would have some but less confidence in recent position changes: what we call ‘known unknowns,’ which are shown next in the list. The main conclusion is that Trump is clearly not an ideologue with a firm set of core beliefs; there are therefore also many unknown unknowns. 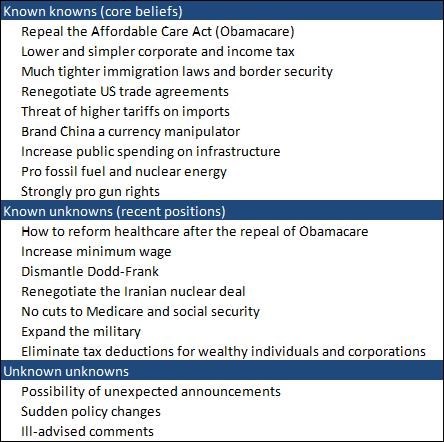 Finally, and at least as importantly, we need to add constraints to the equation. The President of the United States may be the most powerful person on the planet, but he or she is far from omnipotent. The Constitution gives the President more leeway on foreign policy than on domestic affairs, but even on the former there are several checks and balances in place.

Perhaps the most powerful tool for a President Trump to exert influence is via the office’s power to shape and direct the national debate: what President Theodore Roosevelt called the ‘bully pulpit’. Trump is likely to be a natural at this aspect of the job. But this type of influence will take time to have an effect.

The experience from history is clear: a significant shift in the probability of a political event can be enough to move markets.

It is a cliché that markets don’t like uncertainty, but we would expect an increased likelihood of a Trump Presidency to be accompanied by a higher risk premium for US assets. Offsetting this could be the prospect of increased fiscal spending. However, Trump has emphasised measures that would likely add to the debt, such as significant infrastructure spending. This is naturally a less attractive policy from a US bond holder perspective, and would perhaps question the role of US treasuries as the world’s risk free asset.

Some assets that qualify as potential Trump ‘losers’ are likely to lie outside the US, where the President’s policies are less likely to be reined in by Congress. These include Japanese growth and equities. At a stock level, companies that are most reliant on global trade are likely to be the most direct losers of the market attaching a higher probability to Trump becoming president.

Beyond the sugar high of increased fiscal spending, Trump’s anti-free trade, anti-immigration and pro higher minimum wage policies could weigh on corporate margins. To some degree this could be the case regardless of whether he wins in November or not. Overall, it is possible that Trump’s legacy will be a shift of the centre ground of US politics to the left; a move away from globalisation, lower taxes and de-regulation.