The second part of my Asia macro tour swung by Tokyo where in a similar set of meetings I witnessed an even greater sense of belief in the status quo. The impression was that the situation is currently fine, so why make unpopular changes? 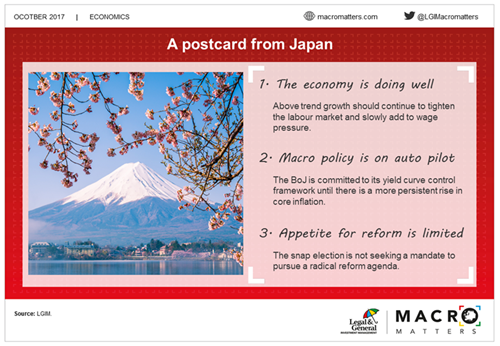 Arriving in Japan I joined one of the 29m foreign tourists expected this year, an astonishing increase relative to the less than 10m visitors in the years prior to 2013. However, I began to doubt the wisdom of crowds after the earthquake tremors on day one and warnings to take shelter as North Korea launched a missile on the second morning. The locals did not seem bothered by either of these two incidents, instead the chatter was around the path of typhoon Talim which was due over the weekend.

In contrast, the economy appeared in a calm phase, with growth expected to remain greater than 1% through 2018. Consumer spending will probably slow somewhat as the boost to real incomes from lower oil prices is now over. Capital spending is modest given very high current levels of profits. The authorities are hoping that low real interest rates will encourage companies to deploy the cash, while private sector participants were more pessimistic.

"In contrast to the mood in China, there was pessimism about the direction of globalisation"

Continued above-trend growth is tightening the labour market and this triggered plenty of discussion about wages. Many part-time employees were now moving full-time. Securing full employment status was seen as more important than a wage hike and a prerequisite before committing to marriage and a family. The lack of churn in the labour market was also holding back wages as workers typically move jobs for higher compensation. Yet wage pressures were expected to build as the output gap turns increasingly positive. But disappointingly, labour market reform has stalled. There seems little prospect of changing the redundancy laws which prevent termination for non-economic reasons. 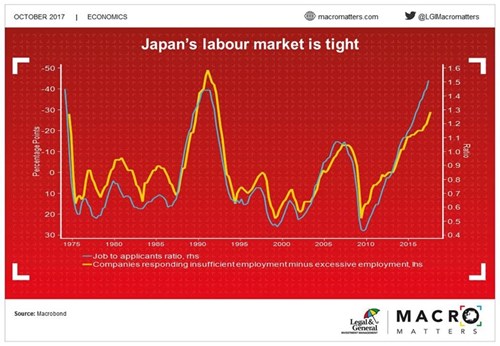 More generally and confirming the message from Lars’ trip late last year, the prospects for the third arrow have diminished. There has been some progress on healthcare, utilities and corporate governance. Agriculture reform has been slow, not helped by the failure of the Trans Pacific Partnership (TPP). Moving forward on TPP without the US makes only a limited difference given existing bilateral trade deals with these countries. In contrast to the mood in China, there was pessimism about the direction of globalisation. There is lip service to the ‘fourth industrial revolution’, but the government’s role is not clear. For a country famed for its electronic gadgetry when I was growing up, Japan’s SMEs (small and medium-sized enterprises) still remain inefficient and well behind on the global IT revolution.

On return to the UK, Abe has surprisingly called a snap election. The political experts we consulted in Tokyo were not expecting this decision, but saw the possibility given the rebound in approval ratings and the lack of opposition within the LDP or outside Abe’s party though that was before the sudden reconfiguration behind Governor of Tokyo Koike’s new Party of Hope. Yet, the impression was that Abe is losing energy and that any election would be about maintaining a steady hand, partly to manage the North Korea threat, rather than seeking a fresh mandate to pursue radical change. In the unlikely event that Abe increases his lower house majority to two-thirds, this would then allow the LDP to initiate a bill for constitutional amendment.

"I left thinking that if the global business cycle can continue, there is a chance reflation might actually work"

There don’t appear to be any big macro policy shifts at present. The Bank of Japan (BoJ) is on auto pilot and Kuroda is likely to serve a second term, assuming Abe remains in office. Yield curve control could turn into an adjustable peg if or when market pressure for higher yields build. This would require core CPI to be persistently above 1% and on a rising trend. This is unlikely to occur for probably the next year. We discussed what policy choices are left should Japan suffer a shock. Most felt the BoJ was out of ammunition, leaving fiscal policy as the only option to boost demand. But there is no appetite to use fiscal policy in today’s stable environment beyond smoothing the fading of last year’s supplementary budget or the consumption tax scheduled for October 2019. The big hope remains that US reflation takes hold which will keep the BoJ buying Japanese government bonds (JGBs) and the yen relatively weak. Equally, there were no concerns expressed with the yen at current levels.

Finally, it was interesting to get the Japanese perspective on North Korea. It was felt that despite all the bluster, the US would not anything radical without China’s consent. One speaker felt the endgame would involve a peace treaty between North and South Korea, the withdrawal of US troops and nuclear weapons all round.

Overall, I left thinking that if the global business cycle can continue, there is a chance reflation might actually work (via a typical cyclical overheating rather than supply side reform). If it doesn’t, Japan will be left with intractable fiscal and demographic challenges, so in either case and with 10-year yields at zero, is it time to revisit the so-called 'widow-maker' JGB trade?