We are fast approaching the Chinese leadership reshuffle in late 2017. Attention could turn from the current period of relative calm and stability to the medium-term challenges lying ahead. In this context, we are likely to encounter three myths about China’s growth slowdown.

The first myth maintains that China’s growth will slow significantly on the back of its ageing population. This is correct, if you take a long-term view, but not over the next five years or so. China’s labour force is shrinking which should subtract ¼-½ percentage point from growth in 2017. But, as shown in the chart, between 2018 and 2023 population ageing will subtract slightly less from growth, thereby actually providing a demographic tailwind in the short term. 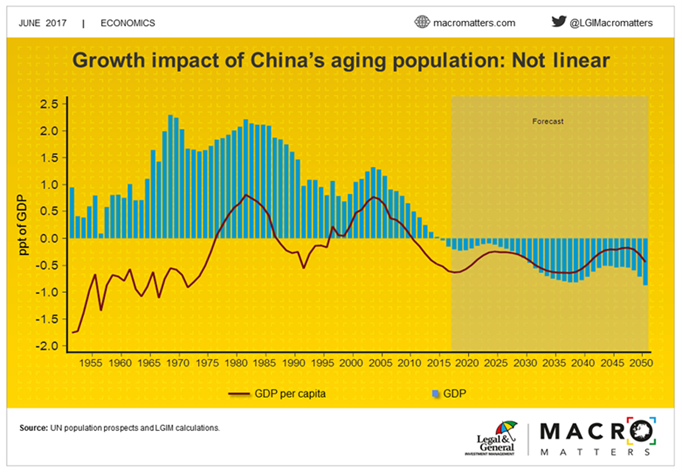 The third myth is that the growth of China’s Asian peers slowed when they were at China’s level of development, as measured by GDP per capita. This is true for Japan and Singapore, but not Taiwan and Korea. It is also questionable whether GDP per capita is an appropriate measure for China’s level of development. In terms of urbanization, for example, China is today where Japan was in 1953, which would imply higher growth rates in the future.

Despite the three myths, we also believe that China’s growth will slow from here, but for a very different reason. The key headwind is a credit bubble of historic proportions which could weigh on growth as the economy deleverages. The distinction isn’t merely semantic. Credit cycles are very long, but they are still cycles, while the three myths refer to trend growth. However, the fact that China still has a lot of underlying catch-up growth should help when it eventually goes through its tough deleveraging process.