The US election: the final stretch

The presidential election is just four weeks away. What should investors expect?

Our baseline view continues to be that it will be a tight race to the end, irrespective of further October surprises. We have seen several swings in polls and bookies’ odds already, but it seems unlikely that either candidate can build a large enough lead in the battleground states for investors to feel confident of the outcome on election night.

Perhaps understandably after the past few years, there are far fewer undecided voters than in 2016 for either side to target in the last few weeks of the campaign. The polarisation of the US electorate also makes it more difficult to sway anyone’s opinions, in our view, almost regardless of the news flow.

Both of these factors arguably go some way to explaining why the polls have been unusually stable so far in 2020. Joe Biden has held a consistent lead of no less than 6% and no more than 10% in national polling averages throughout the race. 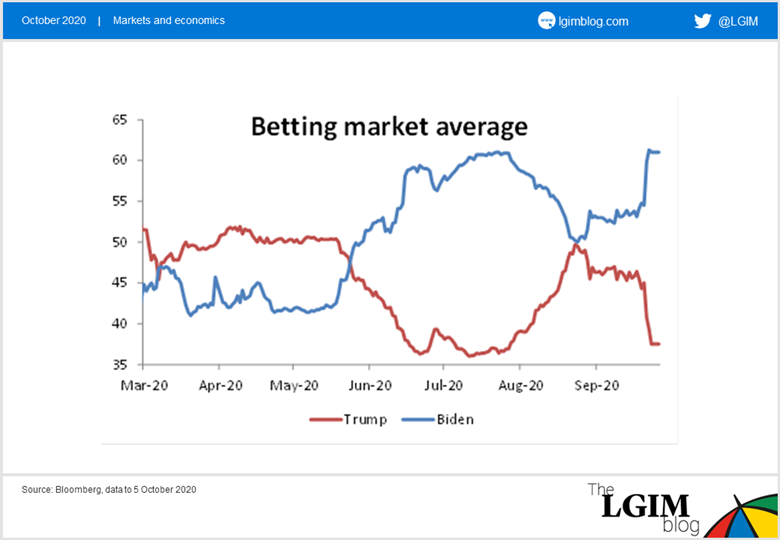 From a market perspective, and with the 2016 surprise still fresh in investors’ minds, this means that markets are unlikely to confidently price a specific outcome ahead of the election. All outcomes are therefore likely to result in some price movement.

With only weeks to go to election day, time is running out for events to change the dynamics of the race. The obvious contenders include news on vaccines, signs of a second virus wave in the US similar to what has played out in Europe, headlines about the economic recovery accelerating or faltering, and of course an equity market selloff because of any of the above or for an entirely unrelated reason.

However, all of these are largely outside the control of the candidates. Only the remaining debates and the Supreme Court confirmation process are planned events that could have an impact on the race. Finally, there is always room for another October surprise, especially in 2020!

But perhaps a November surprise would be even more ‘2020’? Talk about a contested election felt very theoretical earlier this year but, as option markets show, it has come to the top of investors’ minds after President Trump’s comments over the past few weeks.

It’s important here to note the baseline. It is unlikely that the election will be called by the following morning. We should expect Trump to do better on election night as in-person voting results come in, but the ‘blue shift’ phenomenon of Democrats doing better as mail-in ballots are counted is likely to be particularly large this year.

But that does not mean markets won’t move on 4 November. Probabilities of the election outcome can shift significantly even without a confirmed result and the market may not wait for someone to concede to price a likely winner.

There are too many possible scenarios on how a contested election could play out to discuss. A small delay to count votes should have little market impact. The drawn-out legal battle in 2000 cost the S&P 500 around 8%, though some of that should be attributed to the bear market trend. Anything beyond that would be new territory for markets. But if the risk premium for a contested election grows, we could get to a point where any firm outcome, regardless of which party or candidate wins, has a positive effect on risky assets.

This makes our general motto to approaching political events even more important than normal: ‘Don’t predict, prepare.’ We concede that we have no edge over pollsters and bookies in predicting the election outcome. Hence, we focus our energy on thinking through the market implications of different scenarios.

Both sweep scenarios should result in fiscal expansion. Another round of tax reform seems likely in a Republican sweep; while a blue sweep should result in significantly more fiscal spending in areas like the environment and healthcare, this would likely be offset by tax increases. From an equity market perspective, the planned corporate tax changes would weigh particularly heavily as they could take up to 10% off S&P 500 profits. Both scenarios with mixed control of Washington would likely result in gridlock and limited policy changes. 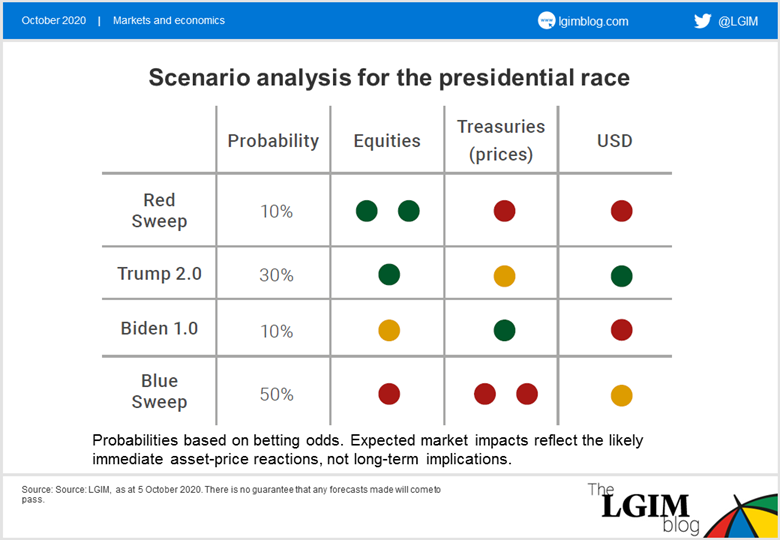