The mystery of the missing dot

One FOMC participant did not submit their longer-run forecast for the fed funds rate for the June summary of economic projections. In a provocative speech the rebel has revealed themselves.

James Bullard (St. Louis Fed President) admitted a couple of days after the June FOMC that he was the FOMC participant that (controversially) did not submit a dot in the Fed’s economic projections for the long-run fed funds rate. He has also revealed himself as the lowest dot for 2017 and 2018. He has one hike for this year and then no further hikes for the next two years. In contrast, the next lowest dot in 2018 is 2-2.25%. This is a radical new approach from him since his March forecast for 2018 could not have been any lower than 2-2.25% (as this was the lowest dot at the time).

Bullard has a history of somewhat erratically changing his mind, so it is hard to label him as a dove or hawk. Now he has changed his whole approach to forecasting. The reasons are outlined in his speech which can be found here.

In brief, he has given up on forecasting. Instead, he now prefers to focus on regimes and extrapolate the current one. So today, the US has negative real rates, low productivity, trend-like growth and unemployment and inflation close to target. This is the regime and since he believes it is not possible to forecast a regime change, a continuation of these trends in his mind is now the most likely outcome rather than gradual policy normalisation.

Another interpretation is that he is losing faith with FOMC forecasts / the dot plot and essentially placing a greater emphasis on market pricing which also appears to be using this same regime / extrapolation approach.

While we expect rates to rise slightly faster than current market pricing, this is another sign that the Fed is increasingly unlikely to return interest rates to normal before the end of the current cycle.

In light of this and the recent volatility brought on by the EU referendum (Brexit), it’s only prudent that we reassess our understanding of the Fed’s thinking and what this means for the future path of the fed funds rate. 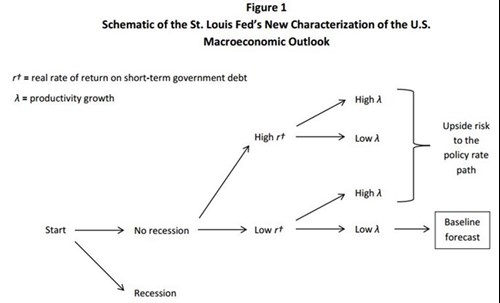