Most discussions on international trade focus only on trade in material goods, but nations increasingly trade in services. This matters for trade imbalances and the impact of global trade shocks on individual economies.

Cars, food, electronic equipment, commodities – these are the goods that typically come to mind when thinking about international trade. The most commonly quoted trade statistics, such as those that led US President Donald Trump to start a tariff war with China, also focus on deficits or surpluses in the exchange of goods between countries.

But that definition is narrow and is becoming increasingly outdated. Nations are trading more and more in services, and focusing merely on goods offers only a partial picture of global trade and its impact on the global economy.

What lies behind this substantial rise in services trade? Services account for roughly two-thirds of developed countries’ GDP; exporters in developed markets, the industrial powerhouses of the past, now instead sell sophisticated services globally (services account for some 45% of UK exports). And as the emerging markets converge to that growth pattern, they consume and trade more services too. Emerging markets are also moving from selling manufactured goods and commodities to selling services as well, adding to the global trade in services as both a purchaser and now a supplier.

Moreover, the very nature of trade is changing. While in the past we might have bought goods, these days we are more likely to lease them, or buy them together with associated consulting and technical services.

Why does this matter? There are a lot of reasons we should be looking at services as an important element of global trade.

First, when we include services, trade balances look very different. The US trade deficit looks smaller (just above $600 billion in 2018, as opposed to oft-quoted $850 billion) and the Chinese trade surplus shrinks to barely $100 billion (from above $400 billion in goods only). The perception of China as the world’s generator of surpluses is thus slightly misguided – and looks even less persuasive when looking at the current account balance, economists’ preferred measure of external balances. So it is far from clear that the renminbi is undervalued or manipulated, as President Trump claims. 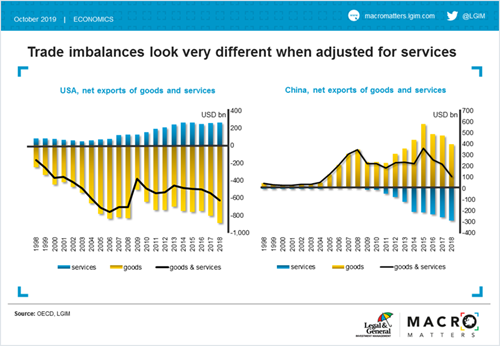 Second, global and individual trade dynamics look very different. For example, the nominal value of British goods exports has been roughly flat between 2008 and 2018. But the value of service exports increased by more than 16%, according to the OECD data. In fact, the UK is one of the world’s leading exporters of services, ranging well beyond just financial services. Taking net service exports into account, the UK has barely any trade deficit. A ‘hard’ Brexit could damage services exports, though, which is one reason sterling has weakened.

Third, services matter for growth in exporting countries. And shocks in services exports can have a more direct effect on growth than exports in goods. This is because services exports – such as financial, scientific, consulting, or even tourism services – include a much higher share of value added (more than 60%), or the extra value generated in the exporting country, than exports of goods (only around 40%).

This is because, when exporting goods, we also sell components and resources produced in other countries: a car exported by the Czech Republic often includes parts produced in Germany and Poland, and steel from Asia. But selling services requires much less foreign input: consultants, scientists, computer programmers, and hotel workers require far fewer foreign inputs to produce their services. This means shocks to services exports can have a quick and direct impact on the exporter’s trade balances and GDP, but also have fewer spillovers to the other countries (unlike, say, a fall in German car exports).

Finally, the growth in services trade means that trade deals – and possibly trade conflicts – cannot focus exclusively on goods trade any more. Indeed, some trade agreements do include more clauses on services. Countries can also place restrictions on trade in services, financial sanctions being a type of these. But with services being more immaterial and, to some extent, not being tied to a particular location (programmers can sell their services from various countries), the ability to fully capture – and control – services trade is still much lower than for material goods. 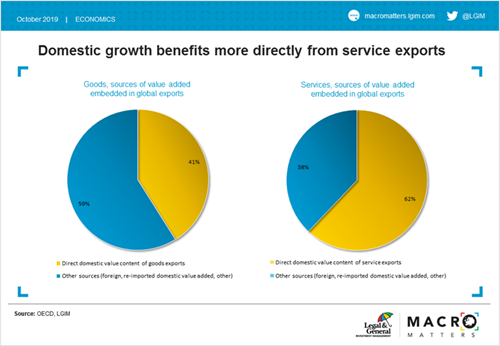 This analysis shows that efforts to rein in globalisation are likely to be damaging to both emerging and developed markets. Emerging markets are set to suffer from weaker goods exports; developed markets are likely to suffer from weaker services exports. Goods are the target of tariffs, but non-tariff barriers rooted in regulatory differences are the biggest threat to services. The economic costs, and therefore market implications, of a breakdown in global trade flows are understated by those who only consider the goods side of the story.