The ECB succumbs to gravity

Don’t write off the latest action from the ECB as a failure yet.

At heart, I’m as much a physicist as an economist. Despite two degrees and a career in the latter subject, Newton’s Laws of Motion are still ingrained in me.

Watching the market respond to further easing from the European Central Bank (ECB) last week, the third of these laws struck me as particularly pertinent. Every action has an equal and opposite reaction.

With another throw of the dice in its attempt to stimulate to the ailing European economy, the ECB delivered a comprehensive package of measures. We saw another cut in short-term interest rates to -50 basis points, tiering of the interest rates payable by banks on their reserves, €20 billion per month of asset purchases, and extended forward guidance.

It wasn’t so much a case of Newton’s apocryphal observation of an apple falling from a tree, but rather furiously shaking the tree to release every possible apple.

Yet unlike the apples, European interest rates actually rose rather than fell on this news. Behold Newton’s third law of motion at work.

In part, this reaction can be explained by the unprecedented pushback from the ECB’s governing council. We were told that ‘consensus was so broad that no vote was needed’, but it appears that the moves were opposed by central-bank governors from Germany, France, the Netherlands, Austria, and Estonia. Together, those countries represent 52% of the population of the Eurozone. That’s quite an interesting definition of a broad consensus.

Rising nominal interest rates are not a clear sign of failure from the ECB, though: inflation expectations are higher, corporate and peripheral bond spreads are tighter, and equities are firmer. During previous rounds of quantitative easing in the US, we have also seen interest rates drift higher as the reflation narrative takes hold.

Overall, then, we do not think further easing from the ECB is likely in 2019. But given our recession risks for the euro area are around 40%, the risks are skewed towards the ECB having to do more than just rein in its accommodative stance. 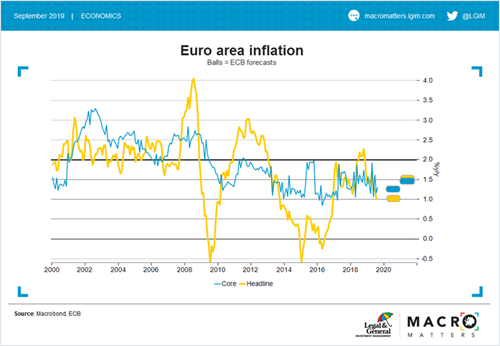 Quantitative easing is likely to last for the foreseeable future, given the persistent inflation undershoot that the ECB itself expects. And further weakness in the growth outlook or rising unemployment could nevertheless lead to a faster pace of asset purchases – this would need the ECB to revisit its self-imposed constraints, such as increasing the present cap of 33% on purchases from single issues and issuers – and/or slightly lower interest rates.

Don’t be surprised, though, if the reaction to any such action is equal and opposite.