The ECB fires yet another bazooka

We expect the European Central Bank’s policy settings to remain unchanged this year, but the risks are skewed towards further easing given a weak inflation profile.

“What is right to be done cannot be done too soon.” These words, from Jane Austen’s Emma, were the Bloomberg terminal’s quote of the day last Thursday morning. On the day of a European Central Bank (ECB) meeting, they seemed particularly apt.

Ahead of last week’s meeting, the market’s expectations for further action at the ECB meeting had ramped up significantly – so much so that the balance of risks was starting to shift towards a disappointing outcome, such as a delay to announcing an increase in the bank’s asset purchases.

In the event, the ECB delivered. While much of its policy apparatus remained unchanged – including interest rates and the pace of Public Sector Purchase Programme (PSPP) – there was one major decision.

The bank boosted its Pandemic Emergency Purchase Programme (PEPP) – set at €750 billion when it launched in March – by another €600 billion. This was just large enough to surprise positively, helping Italian sovereign spreads narrow by a tidy 15 basis points (see also our blog on the proposal for an EU recovery fund).

The PEPP will carry on until at least June 2021, and holdings will be reinvested until at least 2022. The announcement was reached through a “broad consensus”, but was not unanimous; there was debate on the amount by which the programme should be expanded.

Overall, indeed, there was little sign that last month’s German Federal Constitutional Court ruling, which took aim at the PSPP, was hindering the ECB’s determination to provide stimulus. ECB president Christine Lagarde indicated that the court’s ruling is directed at the German government and the German parliament – she was clear that the central bank only answers to the European Court of Justice – and expressed confidence that a positive solution will be found.

For now, we think the ECB has enough to be getting on with but, given a weak inflation outlook, risks are skewed to further easing. Unusually for a central bank, the ECB’s latest forecasts reflect a healthy dose of realism: its baseline projections (see chart below) are similar to our own for the euro area. 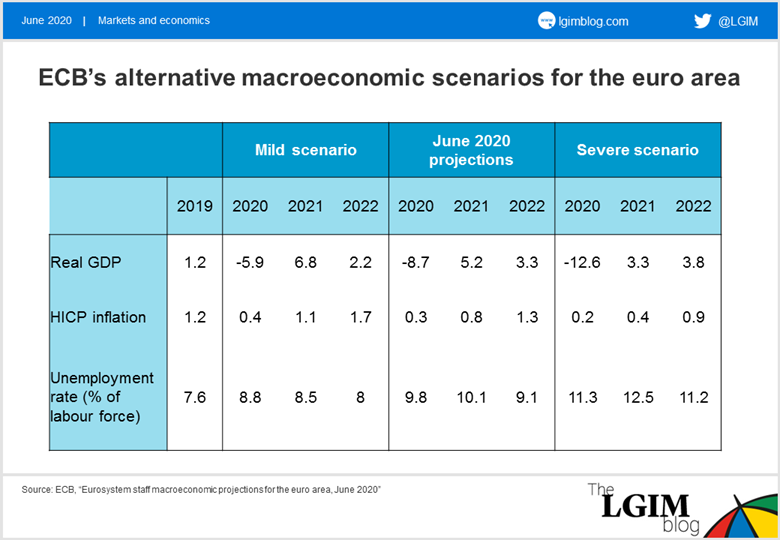