The difference between Xi’s China and Tsarist Russia

In this blog, we tackle some misconceptions about inequality in China and what it means for political stability and investors.

There has been a reassessment of China in the West, and rightly so. It is undeniable that China has moved further away from Western political thought under premier Xi Jinping, as evidenced by increased surveillance, a weakening of the rule of law and a return to leadership for life.

However, as with any course correction, there is the risk that the baby gets thrown out with the bathwater and that the general narrative clouds our views of the finer details. We believe this happened in a recent Financial Times opinion piece, which compared Xi’s China to Tsarist Russia in being “one of the most unequal places on earth”.

China is indeed very unequal, but that is because of its rapid structural change and high growth rates—a phenomenon described by the Kuznets Curve. Simon Kuznets, an American economist, observed that inequality rises as people start moving from low-yielding agriculture to high-yielding industry (or from the countryside to the cities). Eventually, as more and more people are employed in high-yielding industry, inequality starts falling again. The Kuznets Curve – plotting inequality against a country’s living standard – is an inverted U-shape.

In contrast to the Romanovs, China’s government is trying to soften the hard edges of inequality, including because it can lead to unrest. For example, poverty reduction is one of the government’s key policy priorities – note the massive social housing and Xi’s insistence that “houses are for living” (not speculation).

Also, inequality is more tolerable in a fast-growing economy like China, even for those on the lower rungs of the social ladder. Note that China lifted 750 million people out of poverty between 1992 and 2017, according to the World Bank. By contrast, Russian GDP per capita contracted 13% in the lead-up to the Russian revolution. 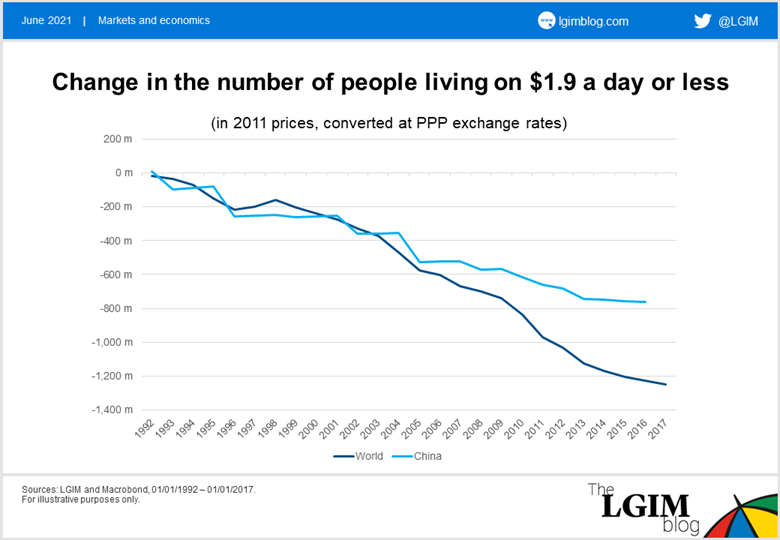 What does this mean for investors? A comparison with Tsarist Russia carries weight in the world of ESG investing. It also implies that China is heading towards revolution and social turmoil. But we believe China’s poverty reduction policies and focus on social cohesion set it a world apart from the regime that was overthrown in 1917.