The curve that cried wolf

The yield-curve boy is crying wolf, raising recession fears. But the villagers at central banks have responded to dangers already.

The ‘yield curve’ has inverted again, leading to a renewed wave of recession fears. The yield curve is the difference between long and short-term interest rates and basically the market’s expectations for future Federal Reserve (Fed) policy.

Sometimes the wolf can be kept at bay... half of Fed easings have led to soft landings 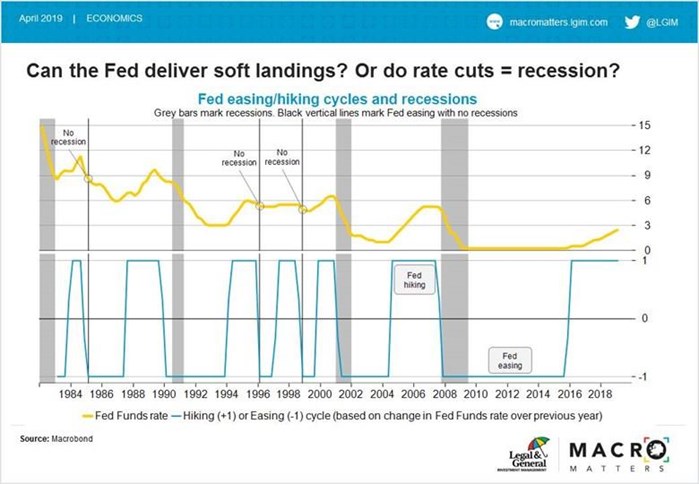 Similarly, when investors fear a recession, they expect the Fed to cut rates. But markets pricing in rate cuts doesn’t by itself cause a recession. However, this analogy is too simplistic. There is another player involved – the central bank – and they can try and influence the weather.

Ahead of the 2008 Olympics, the Beijing authorities fired rockets into the sky to prevent it raining during the opening ceremony. Similarly, policymakers can try to prevent a recession if they fear a storm coming.

The villagers at the Fed, ECB and Chinese central banks have already responded to cries for help

Global economic data have been weak over the past six months while inflation has remained contained. In response, the Fed has already changed tack on its plans to raise interest rates this year. The Chinese government is pushing stimulus through and the European Central Bank (ECB) has announced another cheap-loan package for banks. Corporate bond yields and mortgage rates have fallen in response, echoing what happened in 2016. And there’s still further fiscal easing to come in the US.

So while recession models based purely on the yield curve are getting worse, alternative models are improving. We look at a range of indicators to assess recession likelihood. Using two of the most statistically-significant variables (credit-availability surveys and the change in private-sector interest gearing) suggests the probability of recession is receding.

A recession wolf did threaten the sheep at the end of 2018 as credit conditions tightened. The boy was right to cry for help. With inflation subdued, the villagers at the Fed, the ECB and Chinese government have heard the cries and come out to try and fend off the wolves, similar to what they did in 2016.