The Bank of England and negative rates: will it all end in tiers?

Not the tiers we’ve all endured with lockdown, but rather the ones central banks like to use to help offset any unwelcome adverse effects on the banking sector from negative rates.

You’d be forgiven for thinking that the Bank of England’s decision yesterday to instruct banks to be operationally ready for negative interest rates within the next six months means that rates may be heading in that direction.

And yet, as the chart shows, markets have priced out the chances of that occurring in the near future, with the short-term yield curve shifting up over the past few months, suggesting fewer investors believe negative rates will become reality. So what is going on? 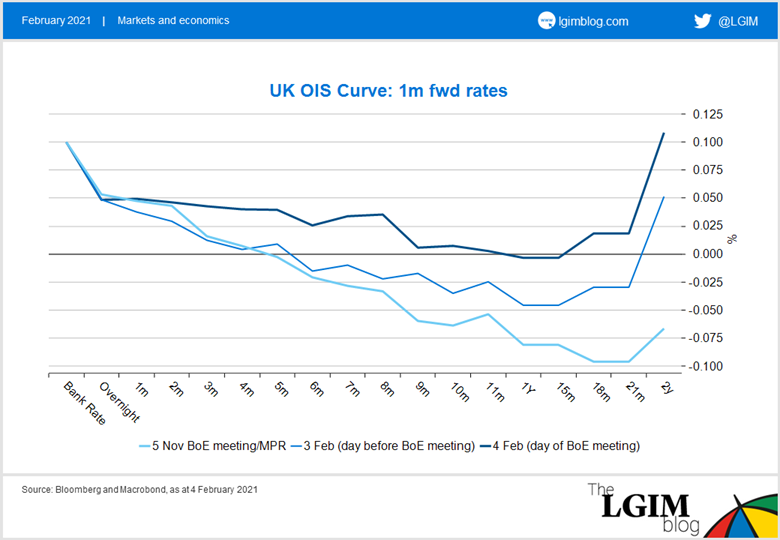 Despite some of the headlines, the Bank was in fact keen to stress that no decision has been made regarding the desire or need to implement negative rates. Indeed, some members of the Monetary Policy Committee worried that instructing banks to be ready would be misconstrued as a signal on the direction of monetary policy.

The comments on negative rates instead reflect the conclusion of a Prudential Regulation Authority consultation on the topic, with the Bank deciding “overall that it would be appropriate to start the preparations to provide the capability to do so if necessary in the future”.

This consultation suggested that taking Bank Rate into negative territory within six months would increase operational risk, hence banks being given six months to be ready for either zero or negative rates. The Bank has also said it would work on a tiering system as part of its own preparations should negative rates be used.

So that is the context in which negative rates were raised as a possibility. But we should also note the Bank’s reference yesterday to commencing work on the appropriate strategy for tightening policy – the market evidently did, judging by the chart above.

This was most likely a deliberate device to offset the notion that asking the banks to be operationally ready for negative rates indicates the direction of policy. That there was no discussion of an effective lower bound, reversal rate or the efficacy of such a policy also reinforces the hawkish message.

We think the probability of negative rates being used in the next 12 months has duly fallen from 30% previously to around 15-20% now. We see virtually zero chance of rates turning negative in the next six months, and in any case negative rates are a less-effective policy tool for reducing the incentive to save when the ability to go out and spend is severely restricted.

However, in our view there is still some chance of the Bank adopting negative rates if the economic recovery falters or inflation fails to rise as expected (which we believe is more of a risk in 2022).

So even though the Bank wants to be ready to deploy negative rates at some time in the future, we think the strong economic recovery expected later this year and more balanced risks to the inflation outlook make it far less likely to pull the trigger any time soon.

Despite officially having an additional viable policy in its toolkit, the Bank is very much counting on padlocking it away for the foreseeable future.