The Ant and the Grasshopper

What happens when babyboomers retire? Have we saved enough for retirement or are we living beyond our means? Academics argue high savings by prime-aged babyboomers in their 'summer' have depressed real interest rates in recent decades. But the community is split as to what happens next as 'winter' comes.

The fable highlights the virtue of ‘saving for winter’. Are we a society of ants or grasshoppers?

Are we a society of ants or grasshoppers?

This suggests households save like ants in their ‘summer’ (aged 25 to 60) to prepare for their 'winter' of retirement.

This has led several academics to argue that demographic factors have boosted saving – and therefore depressed real interest rates – in recent decades. The babyboomers born after the second world war would have been in their summer prime saving years in the 1990s and 2000s.

The academic community is mixed as to what happens next. Some argue real interest rates will remain low (e.g. Federal Reserve (Fed) here and here) while others argue we’re at a turning point and could see an upward trend (see BIS or Bank of England).

The first issue with the Fed papers is they assume households knew how much to save in their prime even though increases in life expectancy and declines in fertility rates were not anticipated. Second and most importantly, they assume no role for a pay-as-you-go welfare state (in fact they admit the economy is bust if we have one).

When we include public consumption by age (healthcare, education) as well as private consumption, you can see that instead of smoothing consumption over time, overall consumption actually rises with age (see blue bar in the chart directly below)! This reflects the surge in public-funded health and social care costs associated with age. 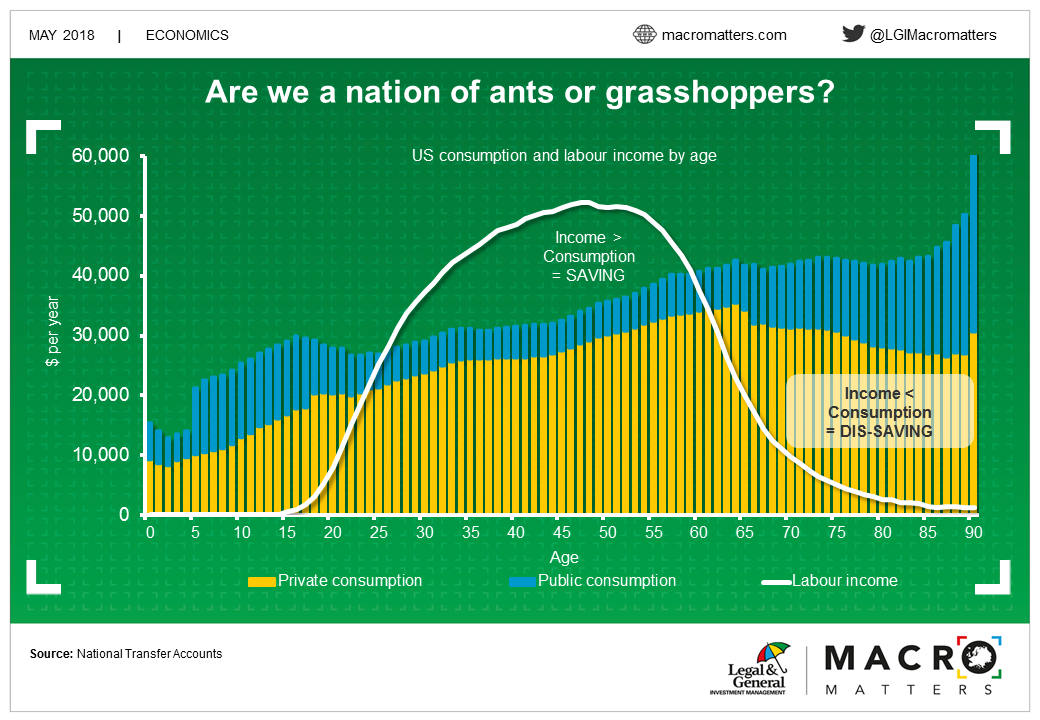 When we also take into account consumption from children (particularly education) it’s obvious that we do not earn enough in our summer prime to cover our lifetime consumption. Instead, our society has been built on something of a Ponzi scheme, relying on growth of ever more people in their ‘summer prime’ to pay for those in their winter. But the decline in the birth rate and increased life expectancy mean winter is coming.

This can be seen by the widening wedge between projected aggregate consumption and labour incomes over the next decade. This is calculated by multiplying labour income and consumption by age by the number of people of each age cohort (see chart below). Labour incomes are slowing as the babyboomers retire, but consumption continues to grow rapidly as their health needs are met.

The widening gap between labour incomes and consumption can only be met by running down savings / borrowing more. Our analysis suggests savings have already peaked and will deteriorate further.

Despite this, global real interest rates remain low. How can this be? Well there are two offsetting factors we will discuss further in future blogs.

Second, China is rising. Because of the country's limited welfare state, Chinese workers save more and are therefore more ant-like than Americans. As China’s importance in the world grows, we have a greater share of ants relative to grasshoppers. This is boosting global savings, potentially kicking the rise in real interest rates into the long grass.

Lastly, the impact of demographics on real interest rates is complicated because it also depends on the outlook for investment as well as savings in both China and the rest of the world. This is a separate topic in its own right.