That’s why gran’s gone to Iceland (to work!)

I’ve never been to Iceland, the country, but I did visit the shop a lot while at university. Their broken biscuits were a particular staple of mine.

Now I’m a dad, and I really hate their marketing phrase “that’s why mum’s gone to Iceland”. Shouldn’t dads go too? But advertising works, so long as the phrase sticks in your head.

Iceland’s use of celebrity mums and catchy phrases is designed to appeal to their key demographic. And demographics is a key topic I am focusing on right now.

I’ve previously argued that US trend growth has probably halved to 1½% due to ageing demographics. The number of school leavers no longer exceeds the number of retirees as the post-WW2 baby boomers retire. This explains why unemployment is so low despite meagre economic growth. 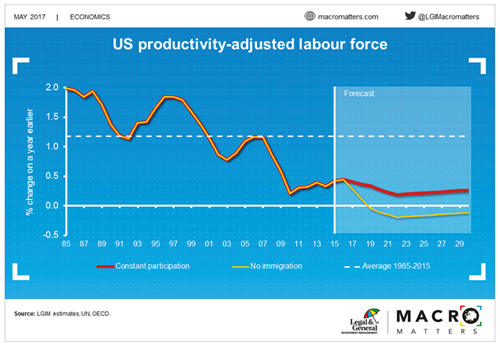 What about the UK?

Well things are somewhat better. The labour force has been boosted by an army of grandmas working behind the tills at supermarkets like Iceland.

The retirement age for women has increased from 60 to 65. This has resulted in a sharp increase in the proportion of older women working in the UK. And with the retirement age for both men and women set to rise to 66 by 2020 and to 67 by 2028, these trends should continue. By contrast, the proportion of older men and women working in the US has moved sideways. 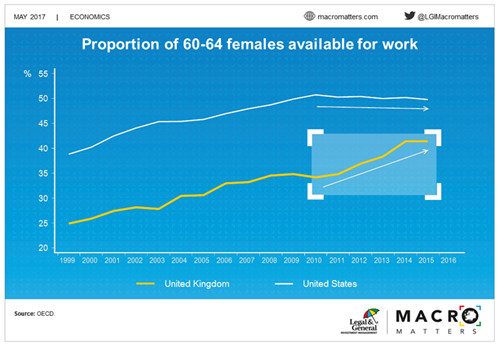 We estimate delayed retirement is boosting the UK labour force by around ¼% (after taking into account the fact that older people work fewer hours).

How significant is that? Well the UK’s labour force has traditionally grown by ¾%, so it’s a decent amount.

If immigration continues at its recent pace, the UK labour force should grow by around ½% in coming years, only slightly below its long-run average. This means the UK should only experience a small reduction in potential growth of around ¼%.

By contrast, the US is experiencing a bigger downshift in potential growth (at least 1%) because there has been no increase in elderly participation in the US.

However, it’s a big IF to assume UK immigration continues. If "Brexit means Brexit" means an end to immigration, the UK labour force would stagnate by 2020. It would be frozen… like most of the food at Iceland… except those great broken biscuits. To keep the labour force growing, you'd have to bring great grandma out of retirement as well.