The market has taken solace from recent weak US core inflation readings and expects rates to remain exceptionally low over the next few years. Yet I believe it requires a much more significant shock to derail the Fed from continuing its plan to gradually normalise monetary policy.

Just as the Fed was becoming increasingly comfortable that it was on track to meet its dual inflation and employment mandate, core inflation has taken a lurch down over the last two months. How will this affect the Fed’s plan to gradually normalise monetary policy?

"While core inflation has taken a lurch down, there is some evidence of pipeline inflation pressures building"

The Fed has plenty of inertia when it comes to one or two data points, especially when the rest of its forecast appears to be tracking nicely. A close examination of the inflation numbers reveals a few erratic items which the Fed will likely view as temporary. For example, in March there was a huge decline in wireless communication prices (mobile phone charges for those us this side of the pond). It appears as if the statisticians, who had been looking at costs per unit of data usage, scored a massive price fall when a bunch of contracts moved onto unlimited data allowances. For April, there was an unusual drop in car insurance prices. While vehicles now have enhanced safety features which in theory might reduce accidents, US motor vehicle deaths rose last year to the highest since 2007. Increased texting while driving and America’s opioid epidemic could be to blame. The latter is also at odds with the record price fall in April of Physicians’ services. 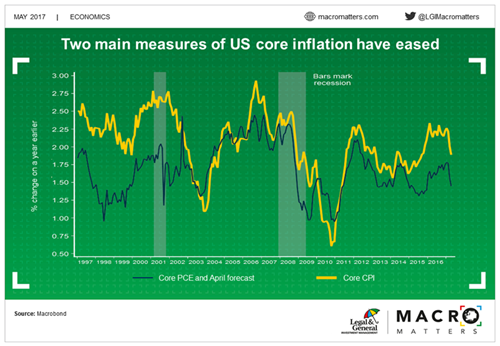 Some of these effect could reverse soon, but others will take a year to drop out of the annual inflation rate so the Fed is unlikely to hit its 2% inflation target (on the core PCE deflator) until at least next spring. As a result, the Fed is probably inclined to nudge down its near-term inflation forecast in June, but I expect the medium-term projections to remain intact for the following reasons:

The Fed is widely expect to hike rates by 25bp at the mid-June FOMC. Thereafter the market is only anticipating two further hikes by the end of 2018. The Fed’s dot plot suggests five more hikes over this period and this is before factoring in much fiscal stimulus. With Congress bogged down with the healthcare reform, the fiscal changes appear to be drifting towards early 2018, but I don’t sense any reduction in desire to deliver some boost ahead of the 2018 midterms. 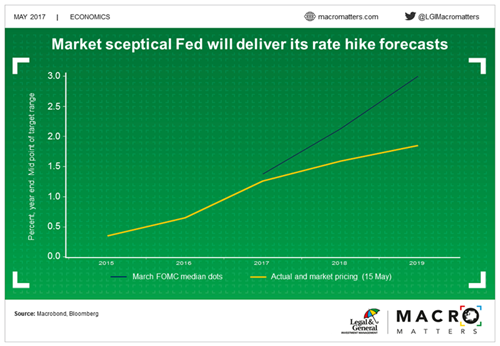 Beyond the performance of inflation and unemployment, the other factor which could influence the speed of hikes is how the market reacts to the Fed's plans to slowly shrink its balance sheet over the next few years. Indeed, without the phasing out of reinvestments of maturing principal payments, the Fed would consider a rate hike once a quarter to be consistent with gradual normalisation. This would still be only half the speed the Fed raised rates in the last hiking cycle which it termed a ‘measured pace’. While we await the details, the Fed has been clear that the balance sheet reduction is likely to start by the end of this year and to be predictable and passive, so it should not be a shock for markets. The aim is to institutionalise the process, making it less susceptible to changes depending on the incoming FOMC members (though in a downturn, resuming reinvestments or even asset purchases remain an option).

Economists are still trying to work out the impact of quantitative easing, let alone what happens when it is reversed. So given the uncertainty, it seems sensible for the Fed to pause rate hikes for a few months while it watches the effect. Even though balance sheet normalisation is not designed to be used as an active monetary policy took, the Fed will still expect an impact on financial conditions, in particular some increase in long-term interest rates. If this only occurs slowly and markets remain relatively benign, the Fed is likely to be keen to deliver the rest of the rate hikes it has signalled.