On the face of it, things don’t look good for Mexico; and that’s reflected in asset prices. Its largest trading partner has threatened to scrap a free trade agreement that's been in place for almost a quarter century. In addition, a populist is leading in the polls to replace President Peña in the July elections. But look again and you might see a country potentially on the cusp of a spectacular comeback.

"The ambitious energy reform of 2014 has started bearing fruit."

Mexico is a manufacturing powerhouse. There are only a handful of emerging markets that have managed to increase their global manufacturing share in the face of a rising China. Mexico, after suffering in the wake of China’s inclusion into the World Trade Organisation, is again leading the pack. Anyone specialising in development economics is likely to tell you that few indicators predict a country’s long-term prospects as well as manufacturing prowess. 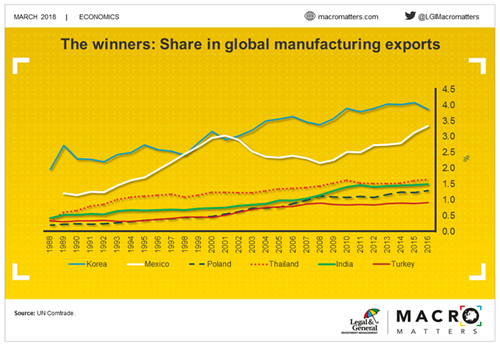 Second, the ambitious energy reform of 2014 has started bearing fruit. Auctions of oil fields are progressing well, foreign direct investment remains high at around 3% of GDP, and oil output could soon rise again after falling since 2005. PEMEX, the state-owned oil giant, was until recently a drag on public coffers, but is now making profits once more.

Third, public finances look good more broadly. The budget deficit fell from 4.6% of GDP in 2014 to 1.1% of GDP last year, beating the target by a wide margin.

Fourth, uncertainty is weighing on consumption and investment, but when the fog clears Mexico will be in strong cyclical position. As a manufacturing hub it is geared to the global recovery, inflation is falling rapidly and the current account deficit is shrinking and sustainable.

Fifth, the mood music around a potential US NAFTA withdrawal is also improving. For example, President Donald Trump exempted Mexico and Canada from likely steel and aluminium tariffs for 30 days with the prospects of an extension. While Trump is hard to predict, we believe that Congress will prevent such an obvious act of self-harm.

"Uncertainty is weighing on consumption and investment, but when the fog clears Mexico will be in strong cyclical position."

Finally, with respect to the elections, the current three-way race for the presidency should turn into a two-way race, where PRI (Institutional Revolutionary Party) and PAN (National Action Party) voters unite to back the leading mainstream candidate. Even if populist leader Mr. Obrador were to win, he would lack a majority in parliament, let alone a super majority to reverse the energy reform. Also, on many issues, including energy reform, his positions are turning firmly mainstream.

So it's worth looking again at Mexico, and not just for the tequilas. Bottoms up!