Spain’s second wave: how worried should we be?

Increased testing indicates we’re earlier in the cycle than caseload numbers alone suggest. But there’s no evidence the virus is being isolated within more resilient, younger cohorts.

After second waves of COVID-19 in Hong Kong, Australia and Japan, attention has now turned to developments in Europe. The major euro area economies (Germany, France, Italy and Spain) are all seeing accelerating case loads, although the picture is not uniformly bad. The Benelux countries have seen their virus growth top out, for example. 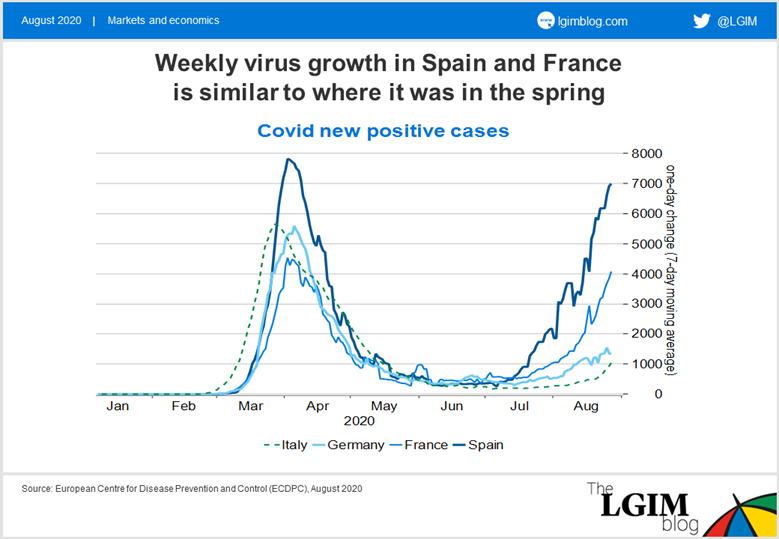 The infection rate is growing fastest in Spain, particularly on a per capita basis, despite the Catalonia region reversing some easing measures a few weeks ago. In absolute terms, the average daily case growth (7,000 per day) is similar to the peak seen in early April. But this exaggerates the current virus threat.

In the spring, Spain was overloaded by the crisis. The country had limited testing capacity so was only testing people with severe symptoms. Most people who were tested had positive results and needed hospital treatment. Today, they are testing more people and picking up milder cases. Only 6% of positive cases today need hospital treatment, suggesting the “true” caseload in the spring was at least 10 times higher. 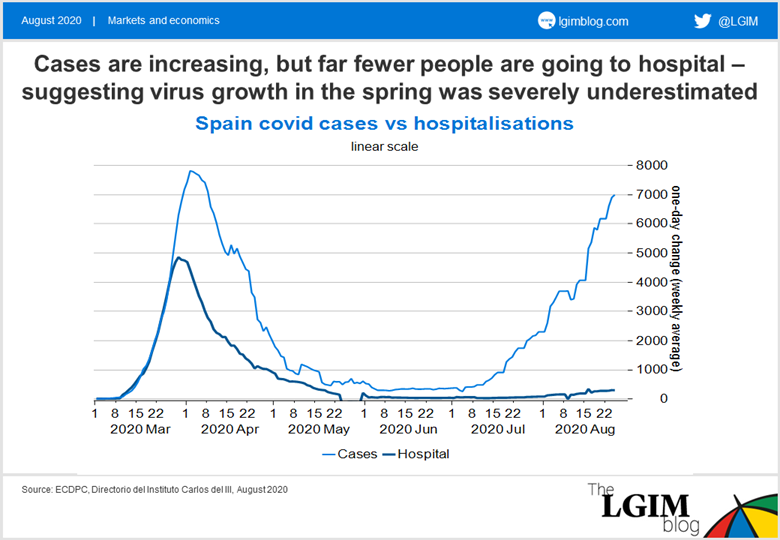 Nevertheless, the rise in virus cases in Spain cannot be blamed purely on more testing. The ‘hit ratio’ (the share of positive test results) has risen from a low of 0.7% in June to almost 10% today, echoing trends in southern states in the US two months ago.

It is often argued that the ‘second wave’ is not a threat as it’s mainly affecting healthy young people. It’s true that the average age of an identified case in Spain has fallen from 60 to 38 (versus 44 for the population as a whole). Mild infections of resilient younger cohorts were simply not captured in the spring. But there’s no evidence to suggest the virus is ‘contained’ within these stronger cohorts.

Instead, the growth of infections has been similar across all age groups, regardless of their vulnerability to the virus. Similarly, when we plot cases versus hospitalisations on a log scale, there’s been a similar proportionate increase over the past month. 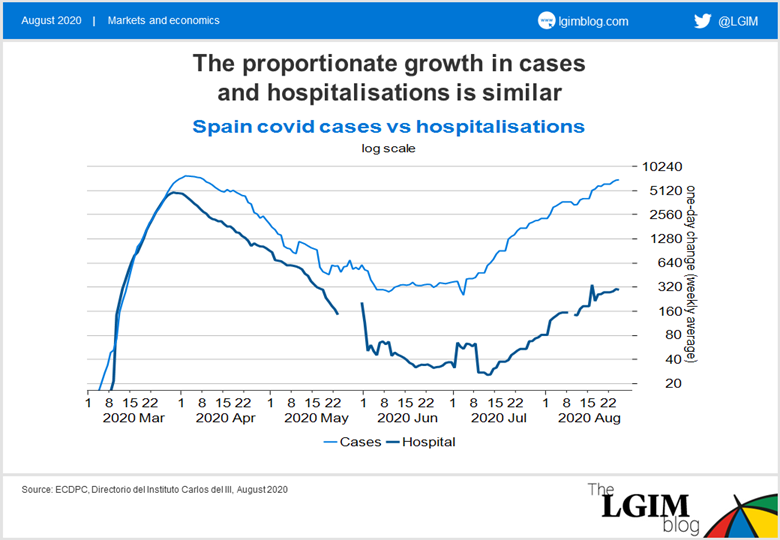 We therefore make the same conclusion we did when US hospitalisation trends were deteriorating. The virus is growing among vulnerable cohorts and not just younger, healthy people. Although the current virus load is low and manageable, politicians will want to bring the growth rate among vulnerable cohorts down with as little economic damage as possible and so safeguard the fragile recovery. A particular concern is what happens in the autumn when colder weather causes people to spend more time indoors.