It’s still a few weeks until the Q2 earnings season, but early indications are promising mainly positive news when things properly kick off in July.

We’re in the middle of pre-announcement season. While this is always very anecdotal in nature, company comments have so far had a generally positive tone and perhaps even more tellingly, there has been an absence of any high-profile negative pre-announcements. Results from early reporters, companies with different quarter ends, have had a similar positive tone.

Another positive indicator is that earnings revision ratios have stayed at exceptionally high levels. There are always fewer forecast changes by analysts in between earnings seasons, but from the data that has come in, there have been far more upward than downward revisions. In May and the first few weeks of June, more than three quarters of revisions in the US were to the upside, a figure only matched in the immediate aftermath of recessions and after the US corporate tax cut at the end of 2017. 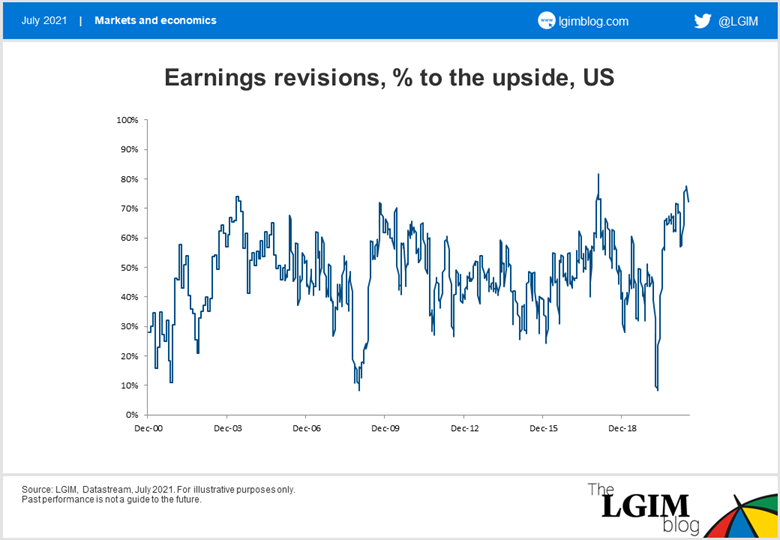 All of this bodes well for the upcoming earnings season and adds confidence to the view that we’ll see another round of significant upgrades to analyst forecasts in the summer. And of course, significant analysts’ upgrades either put upward pressure on share prices or downward pressure on valuation multiples. The truth will likely lie somewhere in between and continue the pattern of equities grinding higher at a slower pace than earnings estimates, which gradually deflates the high P/E ratios of the immediate recession aftermath.

Bottom line: Early indications are for an earnings season that gives another boost to market earnings estimates.