Should investors be worried about US-China relations?

As I wrote in my latest client update, for much of the last century the United States has enjoyed a longstanding position of dominance within the world political system. However, we believe we are entering a new political paradigm and are moving towards a ‘multi-polar’ world, one where the US is joined at the top by other powers such as China. The US must find a way to share its global power, or risk falling into what is known as a ‘Thucydides Trap’. At present, President Trump is likely to continue to talk tough on trade but we do not think it will lead to a trade war, nor would this be in his interest. In recognising both the changing political as well as economic landscape, we believe investors can better inform their investment outlook.

In fifth century BC, Sparta was the dominant ruling power in ancient Greece. However, as the city state of Athens developed its economic and military power, it came to challenge Sparta’s position. Thucydides, a contemporary historian, had the following interesting reflection on why conflict between Sparta and Athens was more or less a given:

According to the Greek historian, human emotion through a mix of hubris and fear was both the trigger for and the reason why conflict could not be averted or stopped. Does this mean that tension is also inevitable between the US and China? To answer this question, Professor Graham Allison of the Harvard Belfer Center for Science and International Affairs has examined conflicts from the Early Modern period to the present to determine how a Thucydides Trap developed and its outcome. In 12 out of 16 cases, the result was a major conflict (see chart) showing that while a conflict is not inevitable, the odds as presented here are high. Professor Allison acknowledges that each case is, of course, unique and that circumstances that might lead to conflict in the 17th century would be unlikely to unfold in the same way in the 21st. 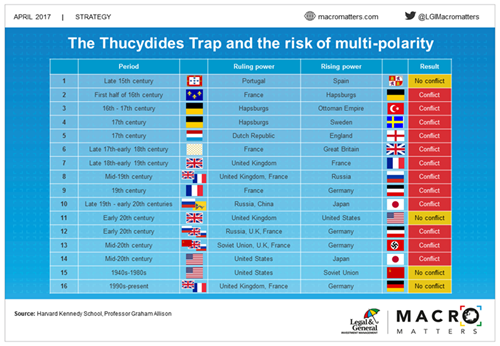 What should investors be on the lookout for?

Much like our work on populism (Going to Extremes), globally-allocating investors can use the paradigm of the Thucydides Trap as a tool to understand how political risk could affect their investment outlook.

The tone of the rhetoric coming from President Xi Jinping and President Donald Trump and their respective administrations can give investors an indication of both heightened and soothed political tensions between the two powers. Despite Trump’s China-sceptic statements, it is worth keeping in mind that a number of his campaign promises have not come to pass. China has not officially been labelled a currency manipulator at the WTO and a 45% tariff on Chinese imports does not appear imminent. Similarly, after a brief diplomatic incident involving the President of Taiwan, Trump has also formally recognised the One China policy, a cornerstone of US-China diplomatic relations since President Carter. Finally, the first meeting between the two presidents seems to have been a successful diplomatic endeavour. During trade talks, it was the Chinese delegation who proposed the idea of a 100-day plan to discuss trade, a particularly American concept which dates back to President Roosevelt’s 100-day plan to deal with the Great Depression. President Trump and his team agreed to the idea and accepted an invitation for a return visit later on during the year.

Tuning out the noise

It is easy to get caught up in over-scrutinising the constant information flow, each event seemingly demanding an appropriate investor response. Very recently, we have seen this occur around Syria (the US retaliation to the chemical weapons attack in Syria) and North Korea (US sending an aircraft carrier to the region to deter further missile testing). If there’s one thing we can be sure of, it’s that these irregular incidents will flare up on a regular basis and investors should not re-evaluate their entire world view because of each one. Almost by definition, most geopolitical incidents are quite unpredictable, the impact on markets is immediate (so it is difficult to get ahead of the curve) and, while sometimes the instantaneous impact is really significant, it is rarely lasting. While it is vital that we monitor and absorb the most important pieces of information, we must also filter out the ‘noise’ of the day-to-day and take careful consideration of what is the current state of relations and where might the trend lie.

In this light we are reminded of the importance of the following: diversifying and stress-test portfolios, managing risk, and focusing on the bigger picture. The macro matters!