Rising fears over Italian debt levels: could Italy's dolce vita be at risk?

Fears over Italian debt levels have risen sharply following the announcement of the country’s three-year fiscal plan. Should investors be worried?

Italy has been on our radar for some time. We’ve covered the rise of populism in the country, its debt situation and the challenges it presents for the European Central Bank. And just the week before last, I was on CNBC discussing the significant tail risks in the country. 10 days can be a long time in both politics and investments, and now Italy’s making front page headlines again.

So what’s happened? Late last Thursday the Italian government published its long-awaited economic and financial document, in which it set out plans to run a deficit of 2.4% in each of the following three years (i.e. 2019-2021). This is at the upper end of recent market expectations, and abandons the previous government’s aims of balancing the budget by 2020 (a medium-term objective enshrined in the Italian constitution).

This proposed fiscal easing is concerning for investors, not least given the already high debt levels of the country this far into a global economic expansion. We believe the next global recession is likely to expose the euro area’s debt vulnerabilities, and Italy is at the top of pile (the debt pile, that is!) – the potential meltdown could be worse than anything my last gelato experienced. As a result, the yield on 10-year Italian government bonds (known as BTPs) has jumped sharply from under 3% to around 3.4% at the time of writing, taking the BTP spread over German bunds (seen as the euro area’s risk-free rate) to near 3% (see chart). 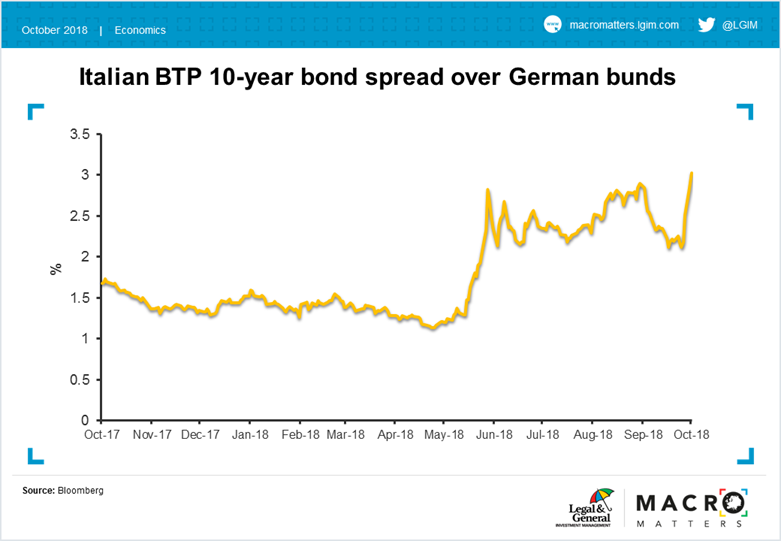 This, in turn, makes the country’s debt burden more difficult to service, potentially creating a vicious downward spiral resulting in a debt crisis.

Although BTPs have sold off, and there has also been some weakness in the euro, we believe that the situation is unlikely to trigger a full-blown Greek-style crisis just yet – a Portugal-style playbook is more likely (i.e. some capitulation from the government). Italy is still running a sizeable primary surplus (i.e. not including debt interest payments), which should be enough to keep debt trending slightly lower, while domestic holdings of BTPs are still relatively high. And although Moody's may resolve its outstanding credit ratings watch for Italy with a downgrade – which is one of the market’s key concerns – it shouldn’t be forgotten that one notch lower to Baa3 would still be an investment grade rating. It is the prospect of being rated sub-investment grade that would be more concerning, and remains a tail risk.

However, while the government’s fiscal plan keeps annual borrowing below the EU’s 3% deficit restriction, the European Commission also requires a structural adjustment of 0.6% (given Italy’s high stock of debt) and such is likely to request some corrective measures when it passes judgement on the 2019 budget in November.

In addition to the fiscal and economic gyrations, investors will be keeping an eye on the political tensions, particularly with the Lega continuing to lead the opinion polls. As I pointed to on CNBC, markets have also been sensitive to the fate of the finance minister, Giovanni Tria, who has tried to keep the deficit in check and played a hand in placating investors over the past couple of months.

The situation serves as a timely reminder that political risk in Europe is still a live concern and that the EU has a number of challenges to deal with – not just Brexit – in the coming months.

Update: the government has now submitted the draft budget to the European Commission…hear my latest thoughts on Sky News.