Last week brought a surprise twist in the outlook for the UK’s fiscal policy. Should we expect a radically different budget from the new chancellor? And what does that mean for UK asset prices?

The most unexpected headline from last week’s cabinet reshuffle was the resignation of the chancellor, Sajid Javid.

The first question for investors is what this means for the upcoming budget. The government took a few days to re-confirm the originally planned date of 11 March, but we don’t know whether the new fiscal rules published only three months ago will still apply.

The immediate market reaction to the news was a slight strengthening of sterling and higher gilt yields, as investors predicted that there would be less fiscal restraint from the new man at 11 Downing Street – the pro-Brexit Rishi Sunak, who until last week had held the post of Chief Secretary to the Treasury. He is now the third chancellor the UK has had in less than a year!

But is this confidence in potential stimulus well founded? Under the fiscal rules set out by Javid in November (see below), the government had the scope to increase investment spending by around £100 billion over the next five years and intended to balance day-to-day spending by 2023. One possibility in the sudden changing of the Treasury guard was that prime minister Boris Johnson and his team wanted even greater freedom. The direction of travel was already heading that way; just days before Javid’s exit, for example, Johnson confirmed that the High Speed 2 rail project would proceed. 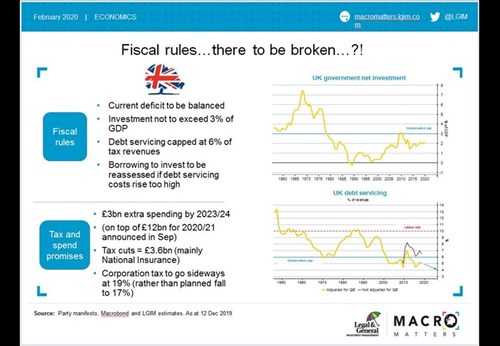 And yet within hours of taking office, Sunak reiterated that government departments must find savings worth 5%. This hardly seemed like the behaviour of someone willing to loosen the purse strings.

On balance, though, we believe the risks to the size of the overall fiscal package nevertheless clearly remain to the upside of the approximately 1% of GDP (spread over five years) we were expecting.

With a new ‘special adviser’ unit working across Number 10 and the Treasury, it seems that the prime minister is taking his other official title – First Lord of the Treasury – very seriously indeed.

Where our portfolios do have exposure to sterling, it’s already being managed to reflect the heightened Brexit uncertainty; our globally diversified portfolios have relatively modest allocations to gilts.

Moreover, we should be careful not to exaggerate the potential market impact of changes in personnel at the Treasury (or Bank of England). Even the seismic institutional change of the Bank’s independence back in 1997 only moved gilt yields by around 30 basis points relative to their global peers.