Will 2019 be the year the US finally decides to repair its crumbling infrastructure? Probably not. Nevertheless, we have bought a basket of stocks that are exposed to US public infrastructure spending. Confused? Let me explain.

The crucial starting point for our argument for buying stocks with exposure to US infrastructure is that sentiment on the sector has become very bearish. This marks a complete reversal from only a couple of years ago, when these companies saw their share prices perform strongly after the US election.

Back then, investors had ramped up hopes that President Donald Trump would want to go down in history as the master builder and push through a big infrastructure spending package. But this optimism has now been priced out in our view. The stocks have fallen back to multi-year lows and the bullishness on a spending boost has disappeared from analyst reports. Legislative gridlock has become consensus. 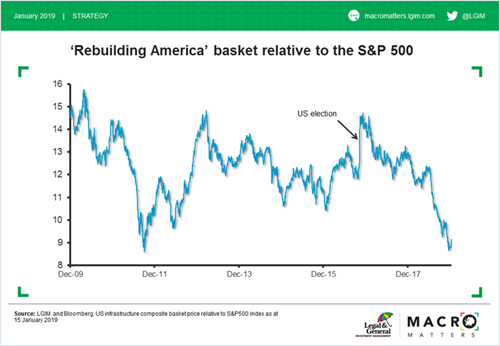 Firstly, Washington gridlock has become too much of a consensus. A big US infrastructure deal is not our base case, but even a more modest plan with limited macroeconomic or budget implications could benefit infrastructure stocks. We would welcome increased spending on ailing US infrastructure as one of the fiscal programs that makes the most economic sense. But more importantly, it is one of only a few areas where the objectives of the Democrats, Trump and the Republicans overlap. If there can be agreement on anything, then it is here.

The recently passed criminal justice reform has shown that bi-partisan legislation is not impossible despite the noisy rhetoric on the surface. There has been only modest progress on infrastructure so far, such as the increased opportunity zones program signed into law via executive order last year. Spending relies on the states as much as the central government, but a push from Washington would go a long way and, we believe, states would likely follow the lead.

Also, all sides have something to gain from a compromise on infrastructure. For Trump it would be another campaign promise kept and would deliver jobs for his voter base (in addition, big infrastructure projects come with lots of ego-boosting, ribbon-cutting opportunities). At the same time, the Democrats would deliver on one of their top policy goals and prove that they are ‘ready to govern’ come 2020, when the next general election is due. Trump has expressed some sympathy for the Democrats’ infrastructure plans, which lean more on debt-financing than the Republicans’.

Secondly, we believe that a basket of US infrastructure stocks represents a cheap hedge against a US slowdown, as an infrastructure spending package would be a likely component of any policy response to US growth concerns. The incentive to be proactive on this front is arguably even greater in the run-up to 2020. A slowdown in growth could quickly erode the Republicans’ current opposition to increasing spending and adding debt.

Finally, infrastructure is likely to feature heavily in the election campaign for 2020. It’s at the top of both parties’ policy targets and neither side will want to be outdone by the other’s plans. If anything, we would expect campaign promises to be larger rather than smaller. Whether this time will be different and campaign promises turn into actual spending will remain to be seen, but the debate about increased spending was enough for 'Rebuilding America' stocks to outperform during the 2016 election campaign.

Overall, the 'Rebuilding America' theme appeals to my contrarian side. The market has become very pessimistic about these stocks' prospects but, as noted above, I see several potential macro catalysts that could trigger a rebound over the next two years.