US corporate profits have been under pressure. While the sector poses the main danger to the current economic expansion, we think it is premature to worry about a corporate retrenchment plunging the economy into recession.

We recently celebrated the live birth of the Macro Matters blog with a cake in the office. I gently reminded some of my more enthusiastic colleagues that the bigger their slice, the less available for everyone else.

It is the same for US 'whole economy' corporate profits which have fallen in recent quarters as labour has taken an increasing share of income, despite the size of the GDP cake continuing to grow. This data is based on tax reporting and is not to be confused with the much narrower S&P500 earnings per share which can be massaged by companies.

The corporate sector poses the main danger to the current expansion, but historically a fall in profits has not marked the start of a recession.

The profits fall has raised fears that companies will embark on another round of cost cutting to protect margins, fire workers and plunge the economy into recession. We agree that the corporate sector poses the main danger to the current expansion, but historically a fall in profits has not marked the start of a recession. Typically, it has taken many quarters of margin pressure before companies retrench. Recent lacklustre profits are partly a function of poor productivity growth. Even though labour compensation has been subdued, rising unit labour costs have squeezed margins.

In the short run, US profits might even temporarily rise again.

However, there are two other factors which have made the profits picture appear even worse and these effects are now fading. First, earlier dollar strength has affected overseas earnings and undermined exports. The dollar has been stable for 18 months and export orders have begun to improve. Second, the fall in oil prices has also taken a few percentage points out of profits in recent quarters, but with oil prices rising since the winter, oil sector profitability should recover.

In the short run, US profits might even temporarily rise again. Growth looks reasonable in the second half of 2016, aided by a recovery in the inventory cycle and less miserable productivity. For 2017 and beyond, we plug the growth profile from our updated lead indicator into our profits model, as discussed by James recently in Stabilising the cycle. Growth is expected to slow gradually and at the same time, the labour market should tighten further and wage growth strengthen. The combination is likely to put margins under increasing downward pressure. 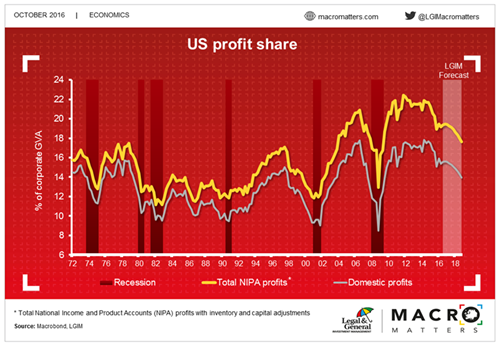 When do lower profits become a problem? We tend to focus on the financing gap. In summary, this is:

Profits - (dividends + investment) = how much companies need to borrow

As this widens, banks can see financial pressure building on companies and they tend to tighten lending standards. When combined with higher interest rates, this can cause increased financial distress and rising corporate defaults. The good news is the financing gap has been fairly stable at a manageable level in recent quarters. The bad news is this is because investment has been weak and companies have kept a lid on dividend payments. But this means companies are not overstretching themselves to the extent which usually signals 'late cycle'. Indeed, it looks like for now the US can have its cake and eat it. 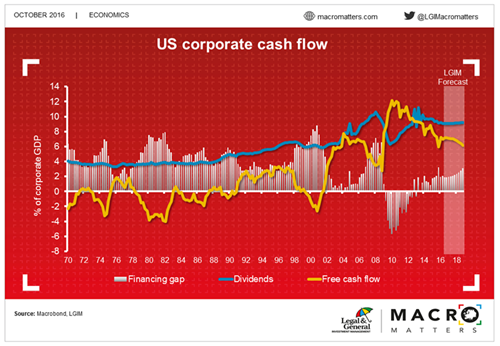