The French have elected an establishment President - surely this marks the end of road of the Political Paradigm? Far from it! More than 45% of French voters cast their ballot for a populist in the first round, more than ever before. In part 3 of this blog series I look at how the theme impacts financial markets and asset prices.

Turns out it’s a lot more complicated to translate the New Political Paradigm into investment conclusions than it seems. There are many different factors pulling asset classes in opposite directions. The ‘Populist pick ‘n mix’, the toolbox that establishment politicians can use to protect against a populist threat or populists will use once in power, is the ideal starting point to approach this question. 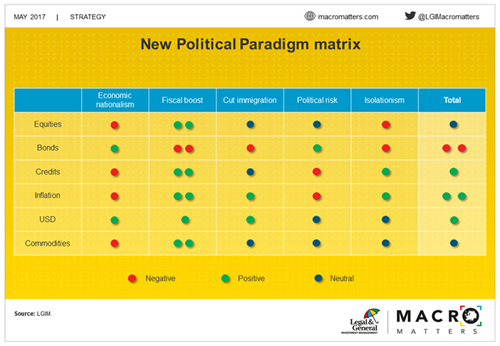 Breaking down the effect of each policy option on each asset class helps estimate the aggregate impact. What becomes obvious is that for most asset classes the benefits and detriments of populism roughly balance out, at least initially. In this model, equities would get a boost from fiscal policy but would also get hit by protectionism or heightened geo-political tensions. It also makes it clear that when it comes to populism, more roads lead to inflation than to growth. As a result, two asset classes stand out as having the majority of effects pull them in the same direction: bonds (down) and inflation (up). 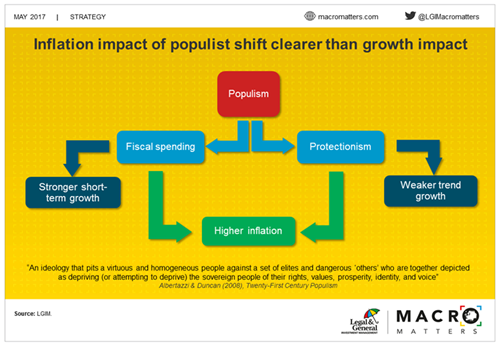 To make things even more complicated, there’s a time dimension to take into account as well. In the short term, equities could benefit from the growth boost that a fiscal stimulus would trigger, but it’s possible (or even likely) that such a stimulus would constitute overstimulation and pull forward the next economic downturn. The experience in Latin America has shown that populism can at first deliver some successes. Growth was boosted, but as bottlenecks appeared inflation pressures built up and budget deficits deteriorated. Financial crises were typically not far behind.

When it comes to populism, more roads lead to inflation than to growth

Taking a more granular look at winners and losers of the New Political Paradigm shows a broad spectrum of affected assets. The tech sector would be a likely winner. There is already a lot of anecdotal evidence to suggest that a rise in protectionism would accelerate the adoption of automation, robotics and 3D printing. Manufacturing may return to the US as Donald Trump promised, but it’s doubtful that this would lead to more jobs for humans rather than for machines. Regionally, we see emerging markets as a net loser from protectionism and greater geo-political risk, and we see Europe at greater risk due to weaker institutions and more uncertainty created by elections. Japan looks like a haven of calm, and the social cohesion that has often been seen as a disadvantage relative to other regions could turn into a positive differentiator. 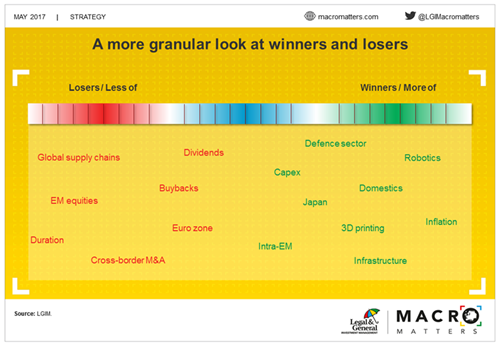 Finally, what do we do with all of this? The New Political Paradigm flows into our investment process in multiple ways:

This concludes my three-part blog series on our New Political Paradigm framework, but I’m sure I won’t have to wait too long for a politician somewhere in the world to give me a reason to write a follow-up.