'Phase One' (but tension remains)

Recent news on the trade war has been positive, but previous experience suggests we should not get caught up in any euphoria.

When President Trump says “I think they’d like to make a deal very badly”, what he means is the US needs to find a reason to back off the next round of tariffs which will directly hurt the consumer – the one growth engine which is still firing.

Following the suspension of the tariffs that were due to go into effect in October, markets have become increasingly convinced a ‘Phase One’ trade deal is imminent. Expectations have been fuelled by encouraging rhetoric from the US and comments from China around an agreement for a phased roll back of existing tariffs.

Paradoxically, though, China pushing hard on tariff removal before delivering on US demands could trigger a last-minute breakdown. While Trump claims the progress in the trade talks represents 60% of a full deal, the reality appears more modest. The Chinese appear to be agreeing to return agricultural purchases to their previous trend (retaliation has led to sharp falls) in return for the postponement of the next round of tariffs in December and a plan for future de-escalation.

There may be some commitment against competitive devaluations, but China has not been intervening to prevent a sustained appreciation for several years now. There is also a possibility of some progress on intellectual property, but this is something the Chinese were moving towards domestically anyway.

The Chinese have been more circumspect about a complete resolution of the conflict and doubt a long-term trade deal is possible with Trump. They see the President as impulsive and prone to renege on any agreement. Furthermore, China is in no mood to rip up its economic model involving heavy state intervention. All the other issues around technology, national security and human rights add a further layer of complexity.

Equally, if Trump offers concessions to get a comprehensive deal, he could be attacked by his opponents for being too soft on China. So we see little prospect of a successful move to ‘Phase Two’ even if Trump gets to laud a potential signing ceremony with President Xi later this month.

Still, the news has been sufficiently positive for the Federal Reserve (Fed) to believe that some of the trade-related downside risks have subsided. After three insurance cuts, the Fed seems likely to pause unless it sees evidence of the economy deteriorating significantly from its forecast. Housing is responding to lower mortgage rates and, although payrolls are expected to slow from the surprisingly robust pace in the October employment report, the consumer remains in a strong position.

We have not changed our baseline forecasts for modest growth, but we now have more confidence in this scenario. Previously, Trump’s strategy appeared to ratchet tariffs higher in an attempt to force China to capitulate. But now a ceasefire might suit both sides and it could last through to the 2020 election. Of course, Trump will continue to bash China on the campaign trail. But China should be relatively inured to Trump’s inflammatory language by now.

Trump can’t afford to see the economy deteriorate any further on his watch. Trump’s advisers have been warning that tariffs are a tax on US consumers and businesses, but for a while he did not see much evidence of damage. But now manufacturing output appears to be contracting and with business investment stalling through this year, the negative impact has become clearer.

Furthermore, manufacturing jobs have particularly struggled in the 13 swing states that could reasonably be won by either the Republican or Democratic presidential candidate. There have been no net manufacturing employment gains in these states over the year to September. In contrast, manufacturing jobs have held up better in the other safe states. This is at odds with the purported goal of supporting the manufacturing constituencies crucial to Trump’s re-election chances. 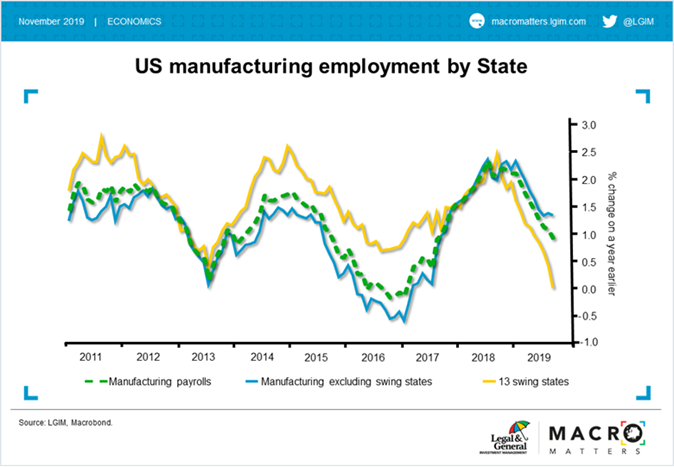 From China’s perspective, it is clearly suffering from major trade diversion due to the tariffs and is still slowing and so will be relieved the tariff pressure is not intensifying. Importing agricultural products from the US, which it needs to buy in any case, does not lead to the loss of sovereignty the US are ultimately demanding and gains it time to bet against Trump winning a second term.

However, improving odds of our baseline forecast should not be confused with a high confidence in the outlook. The reduction in recession probabilities is marginal at this stage. Risks are still tilted to the downside as we could be underestimating the damage already caused by the earlier increase in tariffs.

The ebb and flow of the trade war has already proved to be a chastening experience this year, so we are hesitant to assume the current détente can last. For example, China might overplay its hand in demanding a roll back of tariffs as part of Phase One and talks could still collapse. No doubt geopolitical risks will continue to feature heavily in our investment process.