Last week, we laid out why we believe China is unlikely to be sitting on a property bubble that is about to deflate. But not everything is hunky-dory. Migration to the cities is slowing, and there are only so many decrepit homes to knock down. The trend seems towards less construction in future years.

Over the short term, we expect the credit crunch in China’s property sector to weigh on growth. We forecast the economy will expand by a mere 4% in 2022, down from 6% in the year before the pandemic. More importantly, and quite apart from the current troubles, we believe the property sector has peaked and will turn from a growth tailwind for China to a headwind.

To get to an estimate of future residential construction, we gauge how much floor space will need to be built over the next 15 years.

A key driver of housing demand is rural-to-urban migration. With an urbanisation rate of just 60% – Japan’s level in 1957 – migration is likely to continue for several decades. However, the number of annual migrants is going to fall, according to most projections, and therefore the demand for additional floor space should also slow. 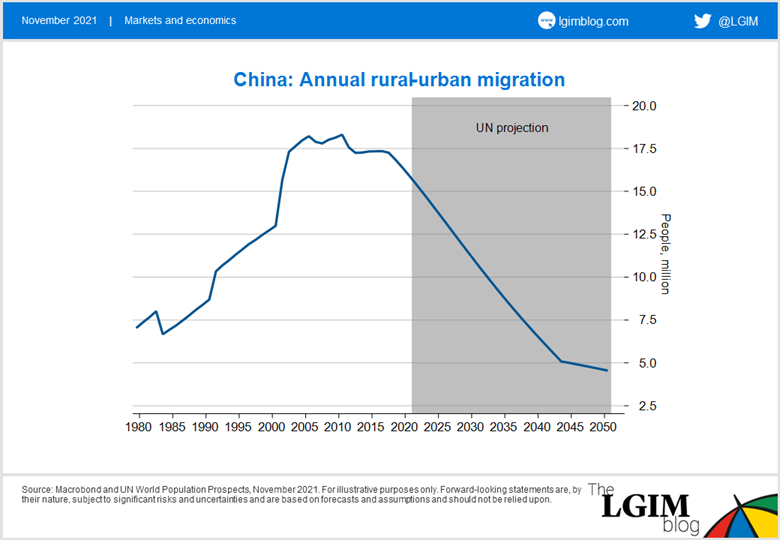 Of course, migration is not the only driver of housing demand. People invest in bigger houses as they grow richer. Also, household size tends to shrink with a country’s level of affluence, as extended families under one roof become rarer and divorce rates rise. A larger number of smaller households requires more houses. For these reasons, we observe floor space per capita rising alongside GDP per capita. 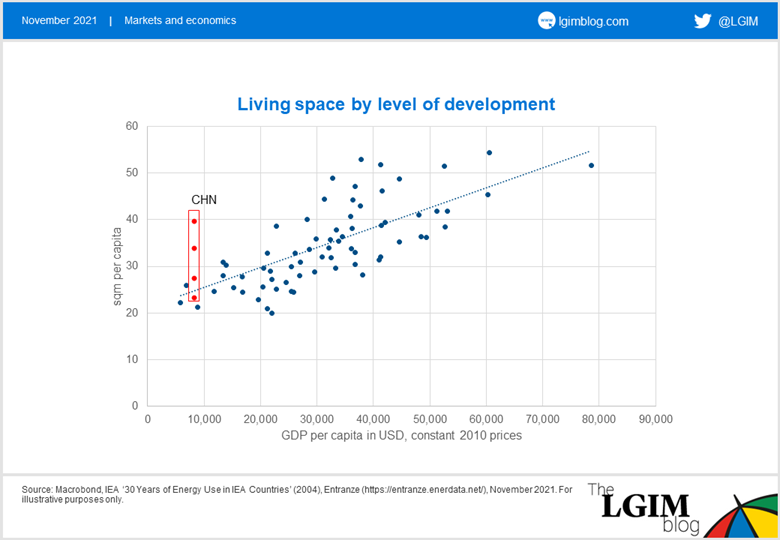 China’s official figure for its floor space per capita is high for its level of development, as indicated by the top red dot in the above chart. (The blue dots represent data points for a selection of various nations at varying points in their economic history.)

Now, there are serious doubts about that official number, as we discussed in the previous blog. But, even more conservative estimates (indicated by the lower red dots) leave little scope for growth over the next decade or so, in our view. Hence, we are holding floor space per capita constant over our 15-year forecast horizon.

The third driver of residential construction is the demolition and replacement of old houses – of which there are still plenty in China. Goldman Sachs reckons that 40% of the housing stock is non-modern, i.e. built before the housing reform of 1998. We follow Goldman in assuming a 3% annual depreciation rate for old homes versus 0.5% for modern houses. Since the share of non-modern housing falls each year, the aggregate depreciation rate will fall, and with it the demand for replacement construction. 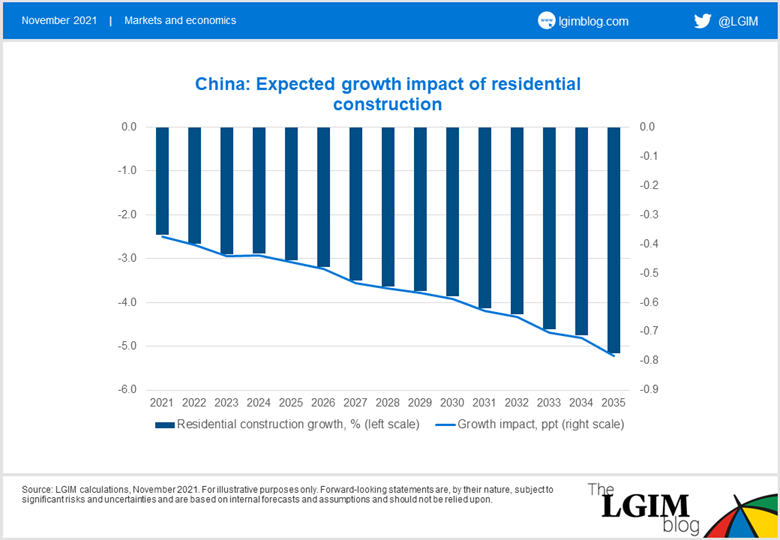 Similar calculations, we are sure, are being run in the corridors of power in Beijing as the leadership manages the problem of overleveraged developers.

However, the ramifications of China’s sputtering property demand will be felt long after the Evergrande* episode is over and well beyond China’s borders.