Should we be concerned about a hit to UK households’ finances?

We’ve been highlighting for months that a fiscal squeeze was set to hit the UK household sector in coming quarters.

In no particular order, we’re facing …  an end to the stamp-duty holiday, the end of furlough and the self-employment income support schemes, an increase in VAT for the hospitality sector, and the expiration of the universal credit uplift. We can now also add an increase in national insurance contributions (NICs) to fund the health and social care levy, and a suspension of the pensions triple lock.

If you add up those effects, we’re talking about several percent off household disposable income from changes in fiscal policy.

On top of that, we have the hit to living standards from surging natural-gas prices. As highlighted by Court Gilbert and Nick Stansbury, this is a Europe-wide problem triggered by reduced gas flows from Russia. Near-dated European gas futures prices have more than quadrupled. But two factors make the UK stand out in terms of potential passthrough to consumers (both residential and corporate): a higher than usual reliance on gas in our electricity generation mix, and low storage capacity.

Normally, we’d argue that an exogenous commodity price shock and higher taxes point to weaker aggregate demand. In turn, that is typically met by dovish tones from the central bank and a weaker exchange rate to mitigate the shock.

However, we recently heard the opposite from the Monetary Policy Committee. Appearing before the Treasury Select Committee, the Bank of England Governor told us that he believed the economy has now recovered enough to meet the minimum conditions to start raising interest rates. He was at pains to inform the markets that this is a minimum threshold not a sufficient condition, but the hawkish tone is unmistakeable.

Then there is inflation, which jumped to 3.2% in August and looks set to hit 4% over the winter. Persistently high inflation also has the potential to dis-anchor households’ inflation expectations and cement higher costs by boosting wages. So it looks like we can add rate hikes to the mix of pressures hitting household balance sheets in the New Year.

The good news is that the starting point for households’ balance sheets is strong given excess savings built up over the past year. The reopening of the domestic service sector is also boosting household incomes.

The bad news is that the households with the weakest balance sheets are the ones most exposed to the real income shocks.

One implication is that we think sterling is caught in the vice between those two forces, and so is likely to remain pretty rangebound. On the rates side, we’ve been looking for the UK to outperform on the fiscal news. That outlook is also now being neutered by the signals from the Bank of England. 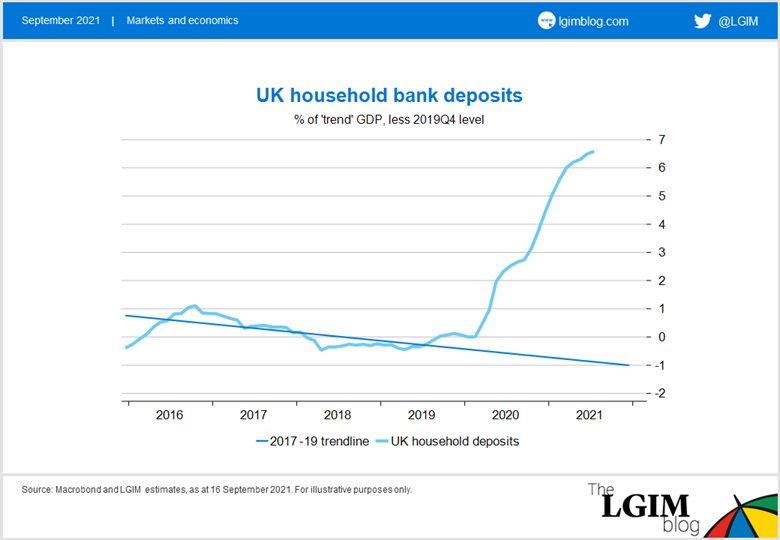