Is the US economy running out of steam?

The rapid reopening of the US economy may have come at the expense of containing a new COVID-19 outbreak. That doesn’t bode well for growth’s long-term health, either.

The US has had some encouraging economic news recently. June payroll data was better than expected, continuing a run of data from housing, retail sales and surveys which has propelled the US macro surprise indicator well beyond previous peaks. But with the virus spreading once again, many high-frequency indicators are showing signs that growth is now beginning to flatten. These include mobility trackers from Apple and Google, credit card spending, electricity output, mortgage applications, restaurant, cinema and hotel bookings.

To remain on a ‘V’ shaped recovery path, the recent virus outbreak either needs to be brought under control quickly or the case load must be successfully managed. It has become clear that warmer weather has not helped contain the spread. Most US states are experiencing a deteriorating situation, despite increased testing. It seems likely the US has opened up too quickly. This has boosted activity, but comes before the virus had been properly contained.

Unfortunately, if the virus spreads through the summer and into the autumn, this could lead to a broader re-imposition of some restrictions or at least a further delay of reopening.

So, what could help? At a minimum, social distancing needs to be followed. A combination of mask wearing and track and trace would be useful. Mortality trends are likely to guide policy choices and could be kept down if infections remain tilted towards younger people and hospital treatment continues to improve.

The US is also facing a potential fiscal cliff over the summer just as growth slows. Many firms have exhausted their Payroll Protection Program funds and will need access to a second round of loans to avoid layoffs. There is also the expiry of the $600 a week unemployment benefits at the end of July. It appears as if Congress opposes a full extension (because these benefits act as a disincentive to return to work). State and local governments are also running short of cash. We expect Congress to pass another substantial package (perhaps as much as $2trn) in the next few weeks, but failure to reach agreement would bring the recovery to an abrupt halt. Even as some government support programmes are extended, many firms are likely to file for bankruptcy and make permanent redundancies as social distancing persists.

For 2021, the timing of the vaccine then becomes a crucial variable. President Trump’s claim that a vaccine will be ready “long before the end of the year” may only be true in a laboratory setting. What matters is when it becomes sufficiently widespread to create close to herd immunity. The recent news on many clinical trials and efforts to create manufacturing capacity has generally been positive and will need to continue for a successful vaccine by next spring. The sooner the vaccine arrives, the less permanent economic scarring is likely to be.

In terms of our economic scenarios, it is possible the US moves between them. One plausible path is shown in the chart below. As the virus spreads, this delays reopening and consumer caution moves the US away from its current Scenario 1 trajectory towards Scenario 2. But if this is first met with a robust policy response and then followed by successful vaccine, 2021 could see a return back towards Scenario 1 – delivering the boost the US economy needs. 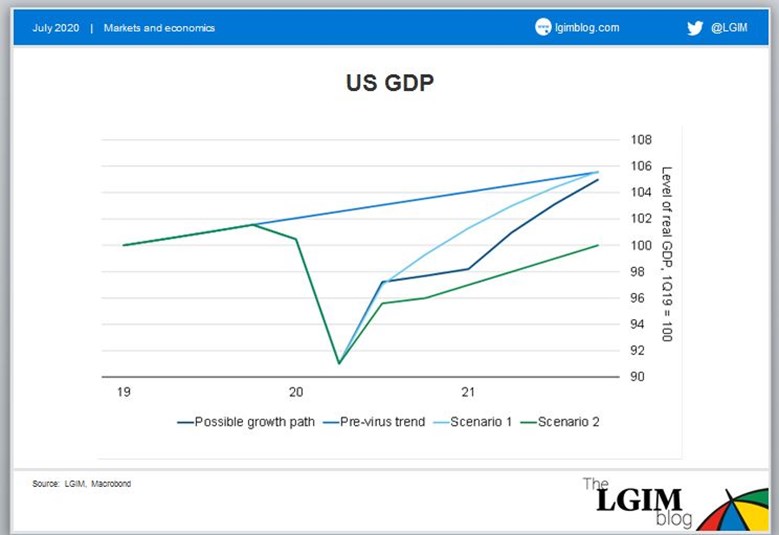