Is China sitting on a property bubble?

Evergrande’s problems have placed the Chinese property sector front and centre of investors’ minds. The sector is undergoing a sizeable credit crunch, several developers have missed coupon payments, and home sales are down 38% year-on-year. How bad can this get? To answer the question, we look at the fundamentals of China’s property sector.

We do not find strong evidence for a property bubble in China, but that does not mean that growth will be unaffected by the sector’s recent troubles. In fact, our growth forecast of 4.1% for the country in 2022 is significantly lower than consensus. But, as we have pointed out before, the deflation of a property bubble could throw China off its otherwise favourable growth path for years, possibly decades. Based on our analysis, however, we don’t believe Evergrande* is the first tremble in such a seismic event.

There are several house price indices for China, with a marked degree of deviation. The median of these various indices suggests that Chinese house prices rose 2.2% per year over the past decade after adjusting for inflation. This is less than GDP growth and does not raise any red flags for us.

The Bank for International Settlements, for example, compiles house price indices for a wide range of countries. According to their data, Chinese real house prices rose a little over 1% per year over the past decade, significantly below the pace that is associated with the lead up to housing busts in other countries. The result is robust to variations in the length of the time window. 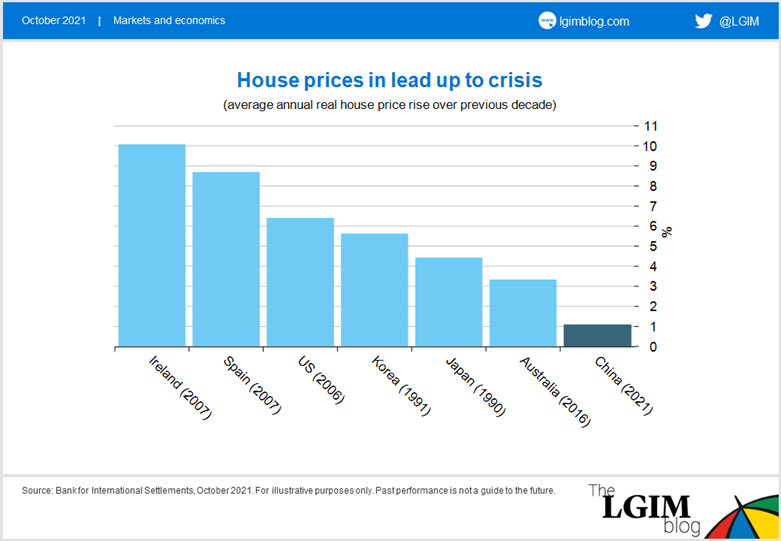 House prices in top-tier Chinese cities do look high by international standards. According to Numbeo, the cost-of-living database, the price-to-income ratio is 40 in Shanghai and 50 in Beijing compared with 15 in London and 10 in New York. Price-to-rent ratios paint a similar picture. Yet while suggestive of overvalued property values, home sales in Beijing and Shanghai account for a little over 5% of Chinese home sales. Hence, we seem to be looking at local froth, rather than a national housing bubble.

Overstimulation in the property sector could manifest itself in quantities rather than prices. Indeed, the share of construction and real-estate services in Chinese GDP has risen from around 10% during 1995-2005 to 15% in 2021. The pace is noteworthy, but not unprecedented – and property activity remains below US and Spanish levels at the time of their housing crises.

Over-leveraged households could be another indicator of a housing bubble. Chinese household debt as a percentage of GDP has risen steadily over the past decades, but at 60% remains below the level usually associated with housing busts. Also, given the dearth of other investment opportunities, property is often purchased with cash, resulting in low loan-to-value ratios. 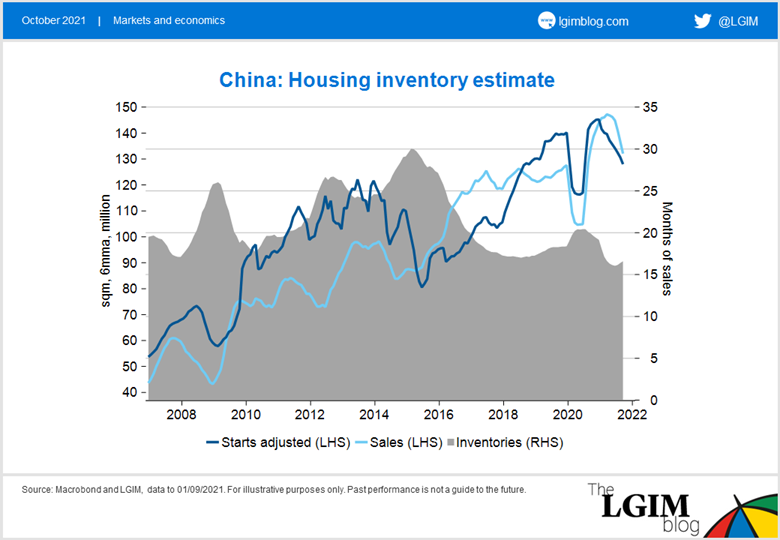 Many people are worried about the inventories on household balance sheets in the form of vacant second and third houses. Again, there is no reliable official data on vacancy rates, but independent studies using electricity consumption or night-time light data come up with urban vacancy rates of around 20%. While elevated, this is not massively above the OECD average of 10%.

Yet another way to identify overbuilding is to compare the urban floor space per capita across countries, considering that it varies with the level of development. The official number of 40sqm per capita puts China at par with more developed countries like France or the UK. However, the official number has been questioned. The independent research provider Dragonomics observes that China counts common areas like corridors or staircases that are excluded in international statistics. The Reserve Bank of Australia believes that the official number is based on registered urban residents, thereby omitting migrant workers. Adjusting for either one of these effects brings the Chinese urban floor space broadly in line with its level of development.

Yet even with these qualifications in mind, we believe the consistency of our findings across multiple fronts – house prices, construction activity, leverage, and inventories – offers some comfort that this is not currently a systemic threat.