The manufacturing mini-cycle downturn might be about to end, with the current industrial recession out of sync with the fundamental anchors of retail sales and financial stress. History suggests the manufacturing sector tends to overshoot but will eventually be dragged back up.

There are two questions I get asked more often than any others. First, “Can I have one more game?” is asked by my son...every night! Second, “When will the global PMI stop falling?” is asked (less frequently!) by Lars Kreckel, our equity strategist.

The industrial sector matters because it punches above its weight. Although it represents just one-sixth of G7 GDP, it accounts for around half of the volatility of G7 GDP growth. This is because goods are more cyclical than services. We watch TV shows (services) every night, but we only buy a bigger, better TV when we’re feeling confident.

Industry is even more important for the listed sector. By definition, industrial companies need machines and often raise money in debt or equity markets to fund those purchases. By contrast, labour-intensive sectors like hairdressers tend to be unlisted.

G7 GDP growth has fallen by 1.1% since the end of 2017. Manufacturing has accounted for the majority (0.8%) of this. (I concentrate on the G7 for GDP data due to suspicions China's real GDP data are over-smoothed.) 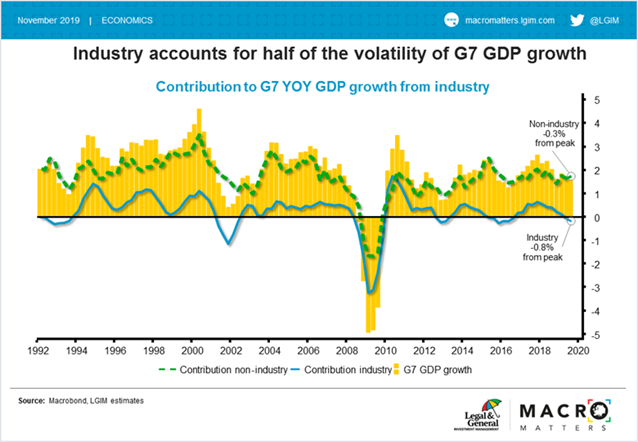 A tug-of-war is playing out. The fear is that the industrial slump will lead to lower profits, tighter financial conditions, job losses, and a downward recessionary spiral. The hope is that the manufacturing mini-cycle is about to end and production growth will realign with underlying demand.

Our analysis suggests the risks are skewed to the upside for manufacturing from here.

Global retail sales growth (including China) fell by one percentage point (from 4% to 3%) through 2018 as oil prices increased and China cracked down on peer-to-peer lending. Financial stress also picked up in the second half of the year as the Federal Reserve kept hiking rates even as the trade war escalated. These shocks should have depressed manufacturing. 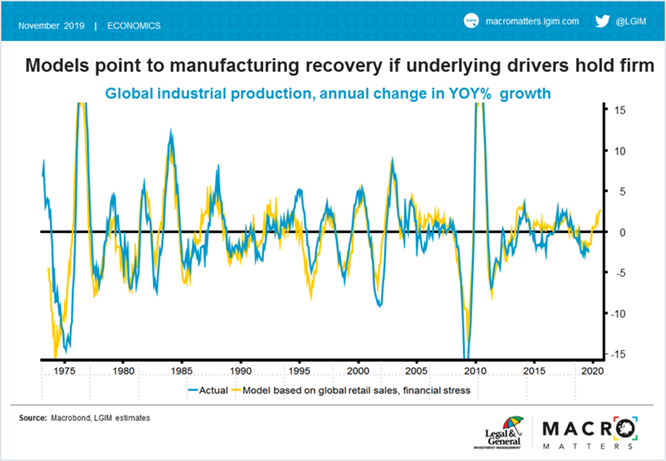 As in 2016, policymakers have responded to industrial weakness by loosening policy. Geopolitical uncertainty remains elevated and although it’s improving at the time of writing, we know how volatile things can be so it could continue to depress capex. But looser monetary policy has, so far, prevented a self-reinforcing tightening of financial conditions.

How about global consumers? They remain subdued but shouldn't experience another one percentage point negative shock. Lower interest rates are supporting the US housing market, helping to keep the US consumer resilient. But the recent surge in pork prices poses a new threat to China, offsetting the stabilisation of Chinese car sales. Japan has also just raised VAT. Overall, we see global retail sales growth holding up around a 2¾% pace.

By contrast, the global manufacturing sector has gone from boom to bust and is barely growing. This is out of sync with the fundamental anchors of global consumption and financial stress.

History shows us that the manufacturing sector is more volatile than the rest of the economy and tends to overshoot: there are three times as many manufacturing recessions as overall ones. This is partly due to the need to cut inventories after an unexpected demand shock.

Our analysis suggests the manufacturing sector will lose the tug-of-war and eventually be dragged up, provided that the global consumer holds firm and financial conditions remain calm.

So maybe I will give my son and Lars the same answer – “That’s it now, that’s the last one.”