India in a funk

We maintain our long-term positive bias on India. The stress in the shadow bank sector will eventually blow over and Prime Minister Modi still has a lot of political capital to push reform. However, while we previously sought to buy on dips, these dips now have to be deeper to entice us.

We have a positive bias on India over the long term, based on the country’s young population, large internal market, India’s potential for catch-up from low income levels, and its mere size and ambition. 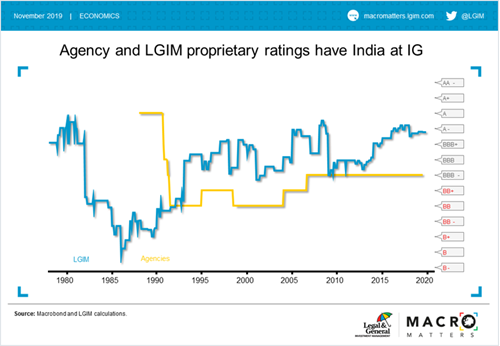 Finally, India has a strong and reform-minded government. Narendra Modi is the most powerful premier since Indira Gandhi, controlling the lower house with a healthy margin. He’s on course to control the upper house in 2020, when past election wins at the local level will be fully reflected.

"Modi is the most powerful premier since Indira Gandhi"

Modi’s BJ party is arguably more reform minded and aspirational than the opposition Congress party, with a greater focus on entitlement programmes. During his first term, Modi enacted important reforms such as those to the bankruptcy code, an overhaul of the goods and service tax, and a recapitalisation of state banks.

In the short term, though, India is in somewhat of a funk. In September 2018, a non-bank financial institution went bust and the ripple effects are still cascading through the economy. Being starved of funds, non-banks have been forced to curtail their loans, which accounted for 25% of total outstanding credit.

The real economy is feeling the pinch. Official growth numbers fell to 5% in the three months to June (from 7.5% in 2018) and are likely to fall further in the remainder of 2019. Industrial production is down 7% over the past two months, the largest fall since the series began in 2012. 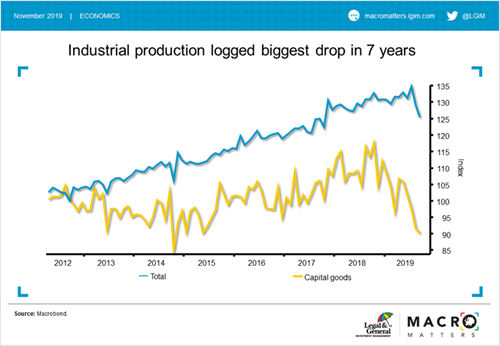 Low growth is weighing on government revenues and undermining an already tight fiscal position, with the deficit around 8% of GDP and government debt at 70% of GDP (although since the debt is denominated in rupees and held domestically, default is highly unlikely). The recent cut in the corporate tax rate from 30% to 22% doesn’t help in this regard and will do little to overcome a lack of demand.

It must also be said that Modi’s reform efforts in his second term have been disappointing so far. Socio-political initiatives, such as the revocation of Kashmir’s status or the expulsion of illegal immigrants, have taken precedence over economic ones. The promised rebuilding of a Ram temple on the site of a destroyed mosque could be the next issue to divert attention from more pressing matters.

At this stage, we maintain our long-term positive bias on India. The stress in the shadow bank sector will eventually blow over and Modi still has a lot of political capital to push reforms. However, while in the past we have sought to buy on dips, these dips now have to be deeper before we get involved.