If at first you don't secede...

According to the Registrar General, the average age gap between Scottish parents and their children has increased from 27 years in the late 1970s to 31 years today. In strictly biological terms, “once in a generation” would therefore rule out another referendum before 2045.

However, in political terms, it means something rather different. In June last year, the Scottish people expressed a clear preference to remain part of the EU but that vote was outnumbered by public opinion in England and Wales.

The UK’s decision to leave the European Union therefore significantly accelerated the timetable to a second Scottish independence referendum. Nicola Sturgeon (First Minister of Scotland) has accordingly announced her intention to hold a second vote: “between the autumn of 2018 and the spring of 2019”.

That has been the cue for some headlines about the possible break-up of the United Kingdom. Escalating domestic political risks would pose a serious challenge to our view that sterling has adjusted enough to represent good value for medium-term investors, so it is worth thinking about this risk seriously.

In that light, it is worth bearing in mind four crucial points.

First, it is not within the powers of the Scottish government to unilaterally hold another referendum: that needs to be negotiated with the UK government in Westminster. The terms of the last referendum were hammered out between the Scottish and UK governments in the 2012 Edinburgh Agreement and there would need to be a similar negotiation to sanction a second vote. Given that Brexit negotiations will be in full swing, there is unlikely to be much enthusiasm for the proposed timetable in Downing Street.

Second, Brexit has done surprisingly little to change Scottish public opinion on the question of independence. When polled, a narrow majority of Scots still express their support for staying within the United Kingdom. Those polls could start to move, or they could be wrong, but there is nothing to suggest a material change since September 2014 (see chart below). 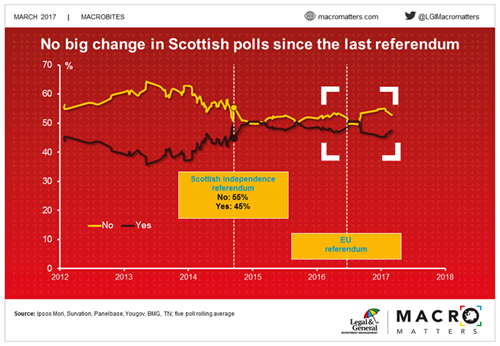 Third, the collapse in oil prices has transformed the economics of the case for independence. On the day of the last vote, Brent crude oil prices were $96 per barrel. Today, they are languishing close to $50 per barrel.

This has had a stark impact on Scottish public finances. Government Expenditure and Revenue Scotland (GERs) figures estimate Scottish public finances when measured on a standalone basis. The Scottish deficit (when including a geographical share of North Sea oil revenues) stands at 9.5% of GDP compared to 4% for the UK as a whole (or 3.5% for the UK excluding Scotland). As shown below, that is quite different to the backdrop to the 2014 vote when Scottish and UK deficits looked fairly similar. 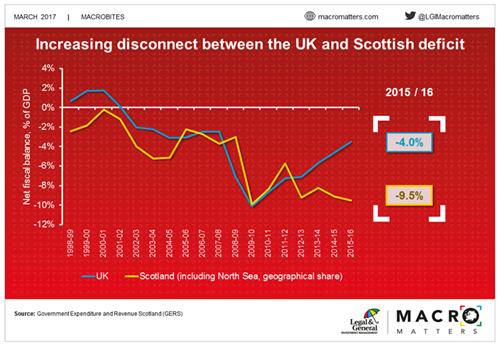 Fourth, the Scotland government has enhanced legal powers since the 2014 referendum. These include new powers over economic policy (e.g. the legal authority to issue its own debt and set an independent Scottish rate of income tax) and social policy. This moves closer to the “Devo-Max” (full fiscal autonomy) that has consistently been the most popular option in Scotland.

We’ve spent considerable time and energy discussing the new political paradigm, and political stability in Western democracies cannot be taken for granted. A renewed push for Scottish independence is arguably just the latest manifestation of that broader trend. The risk is definitely sufficient to raise concerns for sterling bulls but, at this stage, doesn't change the fundamental investment case.