How sensitive is the US to higher rates?

The surprise for markets may be less around the timing of the Fed’s lift-off, and more the magnitude of rate hikes required to cool a potentially overheating economy.

The Federal Reserve (Fed) is on the brink of announcing its tapering programme at the November Federal Open Market Committee (FOMC) and has signalled that this process will likely be concluded by the middle of next year.

Attention will then shift to the timing of lift-off. The market has recently brought forward its expectations for the first rate hike to the second half of next year. We are in the process of revising up our near-term inflation forecasts yet again, so the Fed dots will likely validate this path when the next instalment is revealed in December.

There is an entire industry designed by economists to pick the precise month for lift-off (this kept us going for six years after the financial crisis). But the more interesting question is how fast and how far the Fed will need to raise rates in this cycle.

There are three reasons to believe the peak is likely to be higher than the market currently expects. First, the experience of the last cycle sets the market up for a classic anchoring bias. The Fed raised rates very slowly, just about reaching its estimate of neutral (2.5%) before cutting in 2019 as inflation undershot the target. The Fed’s new flexible average inflation targeting framework and guidance effectively commits the Fed to delay the first rate hike until full employment is reached and inflation is on track to moderately exceed 2% for some time. But by waiting for greater overheating pressure, this alone should mean the Fed ultimately needs to raise rates at a faster pace and to a higher peak than under the previous pre-emptive approach.

The second factor is also underappreciated. The US is not particularly sensitive to higher short-term interest rates. The debt increase in recent years has been heavily concentrated in the public sector. There seems little appetite in Congress at present to tighten fiscal policy in advance of a rise in debt-servicing costs. In contrast, the odds still favour the Democrats passing more stimulus later this year, pouring more petrol on the inflation fire.

The private sector has delevered since the financial crisis. There was a brief pickup in debt during the pandemic, but this largely reflected Paycheck Protection Program loans that have been forgiven or contingent credit lines that have been paid back. As nominal GDP has recovered, the ratio of private-sector debt to GDP has fallen back and will probably fall further over the next few quarters as we expect nominal GDP growth to remain strong.

In addition, the stock of debt has continued to move away from floating to fixed rate. Adjustable-rate mortgages have been even more unpopular since the pandemic as homeowners took advantage of the collapse in long-term mortgage rates. This means the household sector is less impacted by short-term interest rate increases.

We have constructed a measure of private-sector debt that is sensitive to short-term rate fluctuations. This seems no worse now than the late 1980s or 1990s cycle. 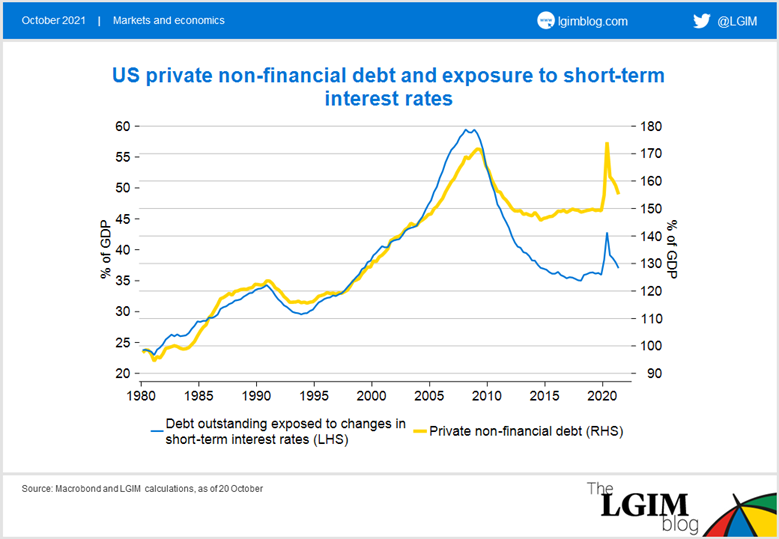 Also, the starting point for households should make them much better placed to withstand higher interest payments. Debt-servicing costs are historically low, current saving rates are still above normal, the stock of excess saving built up from the exceptional fiscal stimulus is around $2.5 trillion (much of this on deposit), and household wealth has soared by around $25 trillion since the pandemic, pushing wealth-to-income levels to record highs.

The corporate sector’s foundations don’t look as firm as in the household sector, in our view, but liquid assets have risen over time alongside debt and credit quality appears to have improved. To expose vulnerabilities likely first requires a slowdown in consumer spending. In addition, banks are much more willing to lend again. 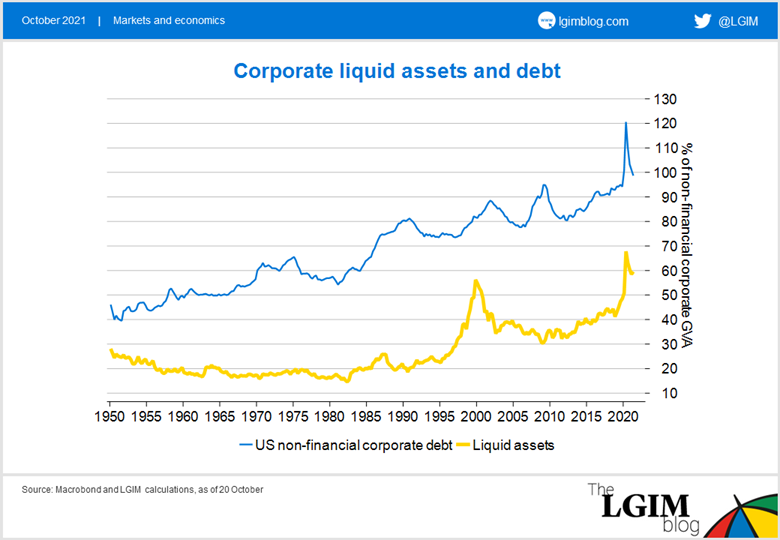 So if the Fed finds it has a persistent inflation problem, it will probably need to hike rates faster than currently expected to cool demand given the strength of private-sector balance sheets. However, the ultimate peak will depend on international feedback loops and the evolution of the neutral rate.

If Fed rate hikes trigger turmoil in other parts of the world, this could alleviate commodity price pressures and lead to weaker demand for US exports, lessening the need for further hikes.

The dollar is also an important channel. Global stress from Fed hikes will likely be associated with dollar strength, as would the Fed going alone on rate hikes. A stronger dollar would reduce imported inflation.

Finally, estimates of the neutral rate fell in the last cycle, and so far neither the Fed nor the market has shown any inclination to start revising it back up again. If the neutral rate stays low, then it won’t take as many hikes to get into restrictive territory.