In a raging bull market there is always the temptation to buy the laggards in the hope of juicy returns from a 'catch-up' trade. Unfortunately, all too often you end up in a value trap instead: there’s a reason the stock has lagged and that reason often turns out to be annoyingly persistent. There’s no doubt that Mexico meets the laggard definition. But I would argue that there’s a strong case it could actually be a catch-up story.

Our 'deep value' screening has been telling us to take a closer look at Mexican equities for some time. Until now, however, it has very much looked like a value trap to avoid.

"But the 90% premium has melted away to 9%, which is a good chunk below the historic average"

But the good news is that a lot of bad news could now be in the price. Mexican equities have one of the worst five-year 'Sharpe' ratios (a measure of performance relative to risk over a set period of time) of the near-200 equity investments we track. Valuation multiples back up the simple Sharpe ratio approach. It’s not that long ago that Mexico was everybody’s darling and its market was trading on a price-earnings (PE) ratio almost double that of the rest of the emerging market equity universe. But the 90% premium has melted away to 9%, which is a good chunk below the historic average. 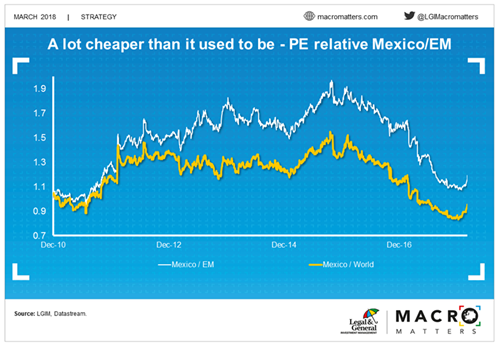 The de-rating has started to have some positive side-effects: a much reduced sensitivity to global risk-off periods. Mexican assets held up relatively well during the recent global correction, which is another indication that a lot of pessimism could already be priced in.

Attractive valuations are reassuring and the low sensitivity to the recent market sell-off is also an attractive characteristic. However, what kept Mexico on our watch list was that Erik’s conviction in the medium-term macroeconomic outlook never wavered and that the three headwinds that had hit Mexican asset prices looked temporary rather than structural: NAFTA negotiations, populist candidate Obrador's leading in election polls and cyclical weakness of the economy.

"When the risk on three temporary headwinds started to fade, the value trap started turning into a potential catch-up trade"

So when the risk on all three temporary headwinds started to fade, as Erik discussed in his blog, the value trap started turning into a potential catch-up trade. We accept that short-term risk on all three fronts remains, so view our current position as a first step in building Mexican exposure across asset classes.

I thought long and hard about something to match the Tequila Sunrise theme of Erik’s blog, but my favourite Mexican drink, Horchata, offers slightly less excitement apart from a Vampire Weekend song named after it. The conclusion is the same as in Erik’s blog, though: Look again at Mexico – there's more to it than great cocktails! Bottoms up!