Have emerging markets had their time?

With the focus on the unprecedented debt build-up in emerging markets over recent years it's perhaps surprising that it remains a relatively attractive investment proposition.

As Chris has highlighted in a previous post, emerging market (EM) debt has reached unprecedented levels. The trend-adjusted debt-to-GDP ratio of emerging markets is at the highest level on record. This also holds true if we exclude the biggest offender, China, from the sample. The Bank of International Settlement finds that trend-adjusted debt-to-GDP is a good crisis predictor.

So, should we expect a major EM crisis and stay away from EM assets?

External debt denominated in hard currencies hasn’t risen at all over the past decade.

We believe the picture is more nuanced. While EM debt has risen markedly, external debt, debt held by non-residents, has risen much less. Hence, we are dealing with a domestic as opposed to a foreign-funded credit boom. External debt denominated in hard currencies hasn’t risen at all over the past decade. This means that the central banks have the ability to create more of the currency funding the debt, providing much more flexibility in the event of a liquidity crunch. 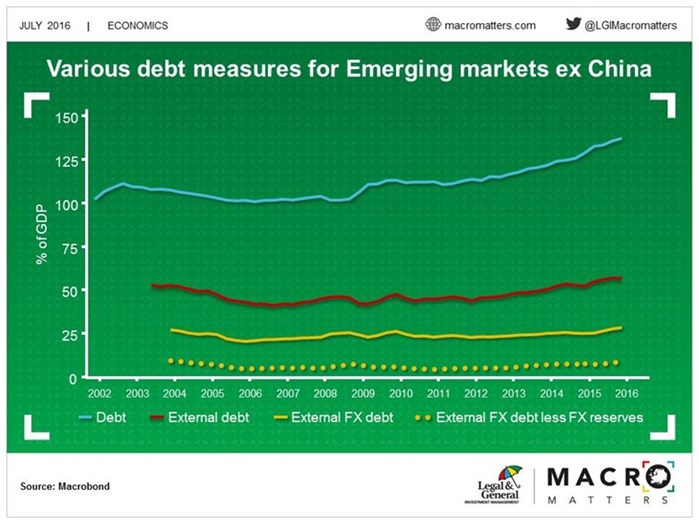 In addition, EM sovereigns are much sounder than they used to be. Yes, public debt is rising given plunging commodity prices and lacklustre growth, but it remains well below historical highs. Reliance by sovereigns on hard currency debt has also fallen markedly with the weighted average now below 7% of GDP. If one takes into account the large stock of foreign currency reserves, EM sovereigns are actually net currency creditors. 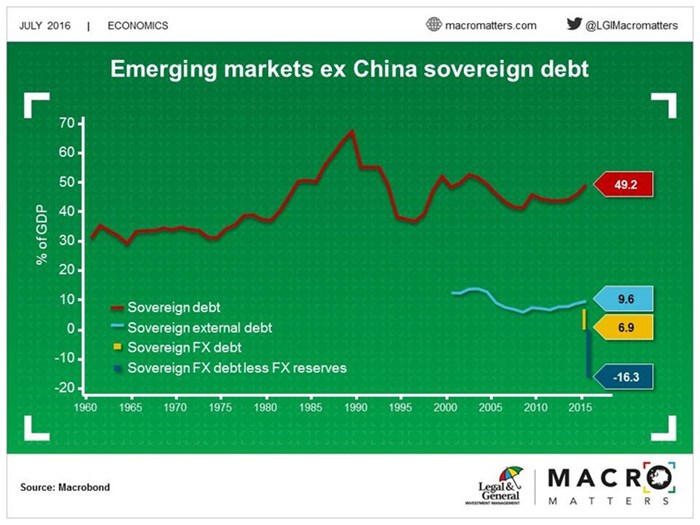 This is not to say that the outlook for EMs will be rosy. In fact, large debt levels have been shown to weigh on growth for years to come. But, given low interest rates in advanced economies, especially in light of the recent uncertainty brought on by Brexit, hard currency EM sovereign debt continues to look attractive.