Grey is the new Black (or White, or Beige)

As our attentions turn to outlooks for the year ahead, it's best to avoid messages from perma-bears, perma-bulls and the hopelessly vague. However, clairvoyance is not a strategy. Instead we should try to favour sound analysis and be more willing to think (and talk) in probabilistic terms, or as I like to call it, shades of grey.

When in comes to year-ahead outlooks, many forecasters will talk in black and white terms, sometimes embellished with spurious accuracy (e.g. “the S&P 500 will rise to 2350 next year”; “the Trump stimulus will add 1.4% to US growth”). However, they are either deluding themselves or others (or both). Anyone peddling that degree of certainty is ignoring a succinct piece of advice from Yogi Berra:

"Prediction is hard, especially about the future"

An alternative tactic is to talk in terms so vague that they make Nostradamus look farsighted (“US equities are likely to be well supported”; “all else equal, the Trump stimulus should boost growth somewhat”). Rather than talk in black and white, those forecasters seemingly prefer wall-to-wall beige.

Conceptually there are three different ways of making totally uninformative forecasts. You can always be bearish and thereby guarantee never being on the wrong side of a market collapse. Alternatively, you can always be bullish and thereby guarantee never missing out on a market rally. Or you can make completely random market calls (e.g. by coin-flipping …).

Expressed diagrammatically, they all lie on the diagonal line in the first chart below. All three positions are equally unhelpful with none of them improving upon the baseline trade-offs inherent in forecasting. 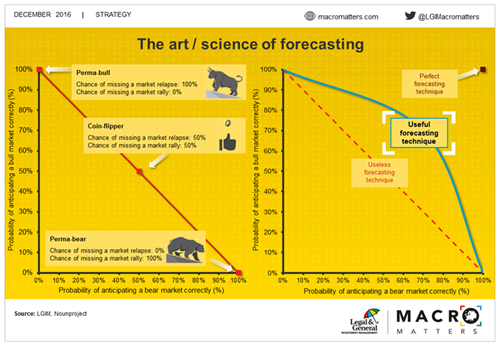 If forecasts are to be useful for making informed investment decisions, it is best to try hard to avoid these particular styles. In our team, our preferred colour palette is instead dominated by shades of grey.

It is not reasonable to expect perfect forecasting; but we should also not be satisfied with the uniformed baseline. Instead, we must strive to push towards the top-right hand corner in the second chart: a useful forecast is anything which tweaks the odds in our favour.

Our preferred colour palette is dominated by shades of grey

With that ambition in mind, we try to avoid the spuriously precise or the infuriatingly imprecise. Inspired by the work of Philip Tetlock’s Good Judgement Project, we think that is encouraged by focussing on model and evidence-based research alongside a willingness to think (and talk) in probabilistic terms.

This may sound slightly robotic (“there is a 40% chance of oil prices falling into the $20-$30 range by June 2016”), but it avoids woolly language such as “likely”, “probably”, “potentially” and “somewhat”. Depending on the context , "probably" can mean anything from 50% to 99%. We want to cut through that frustrating ambiguity.

Methodically trying to push the odds in our favour by sound analysis may be less exciting than staring intently into a crystal ball, but it is a much stronger foundation on which to build an investment process.

Clairvoyance is not a strategy.

Grey is the new Black (or White, or Beige).